Baba Sehgal, the famous Indian rapper who has given us successful albums such as 'Thanda Thanda Pani', 'Dil Dhadke' etc will be the second judge of Zee's upcoming reality show 'Hasne Hasaane Ka Divya Tonic.. Ladies Special', produced by Endemol. 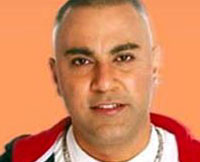 Featured Video
According to our source, "We have finally got our second judge, and it is the popular face Baba Sehgal. He will be giving company to Tabassum who has already been finalized as judge. The shoot for the stand up comedy show for ladies kicks off today, and the launch date will be announced soon".

Yesterday, we had reported that Swapnil Joshi will be the sole host of the show.

We tried calling Deepak Dhar, Country Head, Endemol but he was unavailable for comments.

13 years ago shold be fun .. baba saigal ... not sure but tabassum definitely be good !!! she was so good during early days of doordarshan when her programme called phool khile hai gulshan gulshan used to come where she interviewed stars and with her excellent style of cracking jokes

+ 5
13 years ago Ahh GREAT! At last a ladies special comedy show for female stand up comics. Finally we will get to hear the other side, instead of typical male chauvinist jokes.

13 years ago tabassum is an old actress....she used to do comedy roles :) well I''ll look forward to it.