Raakesh Paswan, the Producer and Writer of Baba Aiso Varr Dhundo on Imagine gets into a conversation with TellyBuzz. The writer turned Producer shares with us his journey in the industry, about his new concept, his evolution from a writer to Producer and much more.. 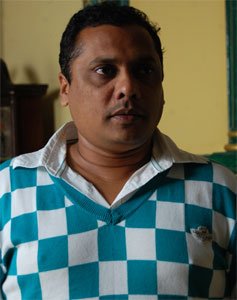 Describe your  journey?  How did you get into the entertainment industry?
I belong to theatre; I started working in theatre after my 10th exam, when my friend took me to one of rehearsals .I liked it and went there everyday. I am from Jharkhand. Later I came to Mumbai and assisted directors in various production houses. I got an opportunity to write episodes for few shows and realized that this is something I always wanted to do. Now I have started conceiving my own concepts and am developing it. I have established my own production house called Village Boy Productions.

How many shows have you written? What are the names of the shows?
I have written about 12-15 shows till now;but I did not conceive them. They include Dulhaan, Mamta, Ek Ladki Anjaani Si, Thodi Khushi Thode Gham, Jahan Pe Basera Ho, Meri Awaz Ko Mil Gayi Roshni. The show which proved to be the turning point in my life was Hamari Devrani. It was my first show, later I did Bhagyavidhaata and Shraddha.

What inspired to write this unique story of the dwarf girl Bharti in Baba Aiso Varr Dhundo?
It is true that there is always an inspiration for writers. I had been to one of the weddings and there I saw a dwarf lady, and one boy was started insulting her. She was very small but he was taller than her and humiliated her a lot. So this instigated a thought in my mind. I started thinking about such people who often had to feel humiliation from society; I used to ponder over the kind of problems they must be facing and so on. I also felt bad to hear one dwarf boy say that one of the saddest part is when their parents die, they cannot even perform the customary rituals for their dead parents. So I decided to focus on every small problem they face in their day to day life.

What kind of research you had to do before writing it?
I did not do any kind of research; I just imagined myself as a dwarf and wrote whatever I could feel. Now Juhi who is playing the lead in Baba Aiso Var Dhundo is helping me a lot; she was staying with me before the show got launched and in those two months I learnt a lot from her.

What made you to turn Producer with this show?
I worked as an assistant director, co-writer and then writer. The next step was to open my production house; it gives an opportunity to grow. It was my dream like any other writer which got fulfilled now.

Which is easier for you, writing a show or producing it?
There are pros and cons of every medium and they both have their own charm too. I am a creative person so I enjoy writing more than production work.

Did you face any difficulty while creating this show as a Producer?
No I have worked a lot at the grass root level and I am aware about how it works. Thus it was not difficult for me to work. My team is very good they are working very hard on this show and I really did not have to look into each and every matter because of them.

There was a phase in your life when you were banned from writing for a year, was it very difficult for you to rise above it?
It was a hard time for me as I could not stop thinking. But I was unable to transform my thoughts into scripts. Those 6-8 months were very depressing and luckily I managed to come out of it.

Post your ban, did you face problems in getting back to the industry?
Everyone knew me personally here since I have been working in the industry for many years. In fact people were approaching me every now and then for work. Thankfully I did not have to look for work anywhere.

What is the feedback you are getting for Baba Aiso...
Audience was guessing that protagonist would handicap in the show, however when they saw the first episode it was pretty shocking and surprising for them. Everyone has been congratulation me for bringing this unusual concept on television, media and my friends all have liked it.

What are your expectations from the show?
I wish people like it a lot; I have worked hard on this show and for the first time people will get to see a lead who is of only 3 feet tall. I hope it changes everyone's perceptions.

How is it working with Imagine and the Programming Head Saurabh Tewari?
We share a very professional bond; we have worked together for Bhagyavidhaata, and he understands me well. We both belong to middle class families and are equally sensible. So I feel very comfortable working with him. Now that he has moved to Imagine, we are again working together and I am happy about it.

Your show is having tough competition in prime time slot from Zee, Star Plus and Colors. What do you think about it?
Yes it is a tough competition, Zee has launched Ram Milayi Jodi and Rajita Sharma who has created this show is very talented. Yeh Rishta Kya Kehlata Hai is already a hit show and  Bigg Boss, Kaun Banega Crorepati are doing well too. But my product is very good and it is surviving the competition, and is getting good numbers for the channel. Baba is the #1 show on the channel as of now.

What are your future plans?
I am ready with 2-3 more nice concepts and I want to see them launch. I have always tried to serve something different with my every show to the audience be it Hamari Devrani, Shraddha or Baba Aiso… I want to make more such shows.

Do you wish to venture into films?
No one has offered me a film so far but surely I want to do it in future once I establish myself as a Producer in television.

Writers do not get deserved recognition, comment?
For writers, shows are like their babies. I have been lucky in this regard as, my actors and everyone in the unit have always appreciated my work. It is true that in India writers do not get any importance like abroad; we do not have enough copyright acts .However I think this picture is changing slowly and writers too will start getting their dues soon.

What are the essentials of becoming a good writer? Any tips for new upcoming writers?
I did not take any kind of formal training and it is not easy to become a writer. I think about an idea and in my heart if I feel it is nice then I start writing it on paper. I guess writers need to be sensible and emotional to understand any individual's feelings; they
also need to start thinking objectively unlike the common man. It is then easy to understand a person or an issue. These things are essential in any writer according to me.

Which has been the most struggling part of your life?
I am still struggling to get TRP's for my show Baba Aiso Var Dhundo. There many phases of my life where I had to struggle a lot, but the worst part was when I wanted to do direction for films. I was trying to get into direction for two years and somehow it did not work. Thus I started writing.

The craziest rumor you have heard about yourself?
I often hear some crazy things about myself, when I was doing Bhagyavidhaata I heard people saying that I actually do not write anything for the show. It is some other person who writes for the show and I just use my name in title credits.

Tell something about your nature.
I am highly emotional person. It helps me in my writing; I am very fun loving and a romantic by heart, though I do not appear so. People say that I am a very humble and down to earth human being. I am careless about my looks.

One thing you want to change about yourself
I think I should take care of my way dressing sense and give up eating too much food.

Where do you see yourself in five years?
I have stopped long term planning, because I think it is not always successful. Therefore I plan things for shorter periods. Doing films is surely my motto; I want to give it a try.

Tell us about your best friends in the industry and about your friendship?
In life you meet so many people and you call them friends, but only few of them remain in touch with you. I have created many friends when I was working for Bhagyavidhaata like Yash, Vishal Karwal, Atul, Richa Soni, Parul Yadav, Prabhat, Yatin and many others. The best part is that even though I am not part of the show anymore, we still hang out with each other after every ten days. Our friendship grew due to sheer mutual respect. Saurabh Tewari too is my good friend, and we keep our personal and professional life separate.

Who has been your idol?
My grandfather. He was an ordinary man with extra ordinary qualities; he was a firm believer of God. He is my inspiration and my life is completely influenced by his thinking.

Arshi Khan To Be Seen in New Show With Akshy Mishra

ImagineTV 9 years ago This show is great! And it is very interesting. And this show is bringing Imagine TV high TRPs, and is most of the time NO1 on Imagine TV. I watch Baba Aise Var Dhundo everyday.

SEPIDEHh 9 years ago When I saw the proms ,so curious about the apperance of the daughter that all the suitors denied her.After a while when the first episode launched I got my answer and it raise my admirations so a very good cocept for picturizing .I saw one of these ladies in the my in-towns travels in bus ,she was very confident and also a good employee and we talked time to time .By the way,congragulations and hope that we can see more of you works in television.

Rhea Sharma to be seen in Ekta Kapoor's next?
49 minutes ago