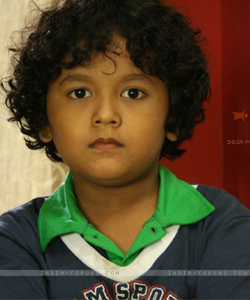 Azaan Rustum Shah will now be seen in a cute and interesting role in Star Plus' upcoming show Pyaar Main Twist. The show to be produced by Neela Telefilms is a love story of a geek guy and a beautiful girl where Manish Paul and Roshni Chopra play the leads. The little kid Azaan will be a major part of the show and will be seen nagging Amol, Manish Paul, by calling him Daddy.

Our source states, "Azaan will play the role of Chikoo who lives with his mother, played by Rajshri and the lady happens to be the colleague of Amol who wants to get married to him at any cost. In this quest, she trains  her little son Chikoo to call Amol as his daddy always, and pester him to marry his mother. This situation will give rise to hilarious twists when Amol is all set to marry the girl of his life, played by Roshni Chopra, and this little kid is always there to address him as father".

Azaan has a very strong role and his character will be introduced in the very first episode itself.

When contacted, Azaan's mother confirmed the news saying, "Yes, Azaan will play an important role in Pyaar Main Twist. He is excited about being part of the show".

Azaan is also present in Parindey, the Channel [V] show that launches on 21st January at the 7.30 PM slot.

Pyaar Main Twist will go on floors from 29 January, Saturdays and Sundays, at 10:00pm on Star Plus.

11 years ago That''s horrible... my prayers and condolences to his family!

+ 5
11 years ago He was a great singer of old times. May his soul rest in peace!