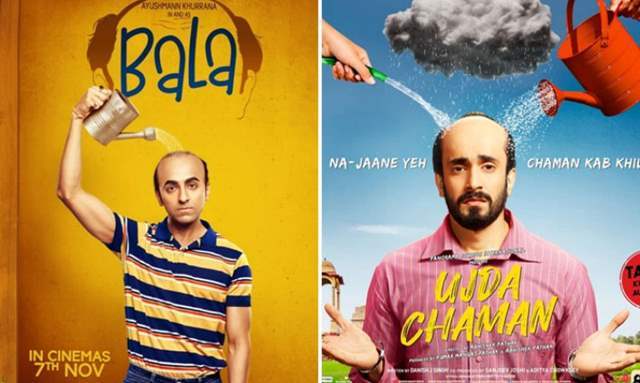 Ayushmann Khurrana's Bala and Sunny Singh's Ujda Chaman, both revolve around the issue of premature balding in men. Now, with two films based on a similar plotline, it will be nothing less than a battleground on the box office, or to be more precise, a ‘Bald Battle’.

To add fuel to the already speculated competition between the two films, the makers of Ayushmann’s film released the trailer of Bala, announcing the film’s release date as October 7, 2019, which is exactly a day before Sunny Singh’s Ujda Chaman, slated for an October 8 release.

Check out the trailer of Bala below:

Bala was earlier being planned for a November 15 release and prior to that, it was slated for November 22. But, seems like the makers did not want to take a chance with two films revolving around the same subject, they preponed the release and moved it a day before the other film.

Kumar Mangat, the director of Ujda Chaman also expressed his disappointment against this sly move by the Bala makers and stated it as extremely wrong and unethical.

And now, the producer of the film Abhishek Mangat has reacted to the fiasco, stating that they will soon take legal action against the makers of Bala, citing copyright violation.

“We are discussing it with our legal team and will take action in a few days. This is a clear case of copyright violation. I can understand two films around a bald character releasing within a short span of time, but in this case, there are striking similarities with my film and the original whose rights are with me,” Abhishek Mangat told Mumbai Mirror.

Abhishek further confirmed that his film, Ujda Chaman, is an official remake of Ondu Motteya Kathe. He added that Ayushmann’s name should have been enough to make the producers of Bala secure over the film’s fate. “At least let it be a healthy competition. In this case, even their poster design is similar,” he told the daily.

Check out the trailer of Ujda Chaman below:

“Going by the two trailers, their content looks similar to the original Kannada film and my film, including the closing dialogue and the way both characters flip their respective cap. It’s obvious where their inspiration came from, but while we have the official remake rights of Ondu Motteya Kathe, they have tried to manoeuvrer the screenplay by flipping a few things, like in the original, there’s a girl selling a hair-growing product to bald people, in Bala you see Ayushmann selling products to dusky girls,” he professed.

However, this is not the first time Ayushmann’s film will be facing legal trouble, as the film had been mired twice with a copyright violation case earlier.

Meanwhile, Bala or Ujda Chaman, which film are you looking forward to? Let us know in the comments...