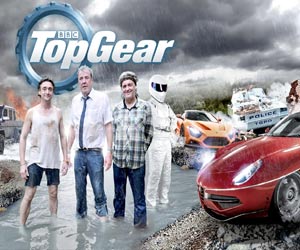 The world's most-watched and much-awaited television show Top Gear is back to storm the auto world. The new Season 21 premieres in India on 7th February, every Friday at 9 pm, exclusively on AXN.

As if the anticipated return of Jeremy Clarkson, Richard Hammond and James May was not enough, the Indian viewers will get a chance to watch their favorite show even before its US premiere.

Commenting on the premier of the new season, Mr. Sunil Punjabi, Business Head, AXN India says "At AXN, our efforts have been focused to provide our viewers with the latest international content on the channel. As one of the pioneers in the English entertainment genre in India, we understand the pulse of our viewers and are always striving to provide thrilling and trend setting quality entertainment. Top Gear is the world's biggest auto show and we are really excited to be able to bring it to the Indian fans before the US. We believe that with this show we will strengthen our relationship with our viewers."

So, Seat up and embrace yourself as the hot wheels are back with Top Gear, Season 21 to redefine adventure by pushing every vehicle that comes their way to an unimaginable extreme. The new season promises more excitement, more thrills and more speed along with a lot more tear, break and crush.

Nothing gets the adrenaline pumping than a blazing fast car. The show in its latest season features some of the swiftest cars on the planet, some more street-legal than others. Getting your need for speed from Top Gear' certainly beats getting a speeding ticket!

In the all-new series, hosts Jeremy Clarkson, Richard Hammond and James May are here to take you on an array of new adventures, challenges and stunts which will keep all the car fanatics glued. Have you ever imagined a six wheeled Mercedes, that too in a dessert? If not, watch out for this high-flying mayhem and much more that lies in store!!