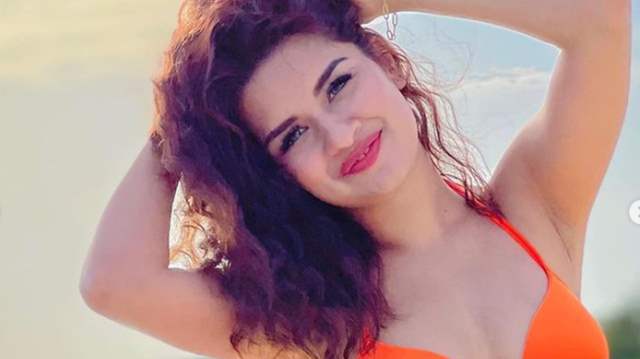 There is no doubt about the fact that Avneet Kaur is a social butterfly. The Aladdin star seldom misses an opportunity to surprise her fans on social media with her alluring posts. She is a fashionista and ups her style game every time she uploads a picture.

It looks like the star is currently relishing her vacation and how. She recently took to her Instagram handle and shared a bunch of pictures in a bikini setting social media ablaze.

She looked every bit alluring in the ensemble. Avneet opted for an orange bow-tie halter neck top wear along with complimenting bottoms. She left her tresses loose and went for a nude make-up look with berry pink lip shade and mascara laden eyes. She accessorized her look with golden bracelet and rings.

As soon as she dropped the pictures, fans and followers showered her with praises for her sizzling look.

Avneet Kaur has ben a household name for her appearance in an array of TV shows and music videos. She has been a part of serials like, Tedhe Hain Par Tere Mere Hain. She gained prominence with roles like Queen Charumati in Chandra Nandini and the most recent one being Shehzadi/Sultana Yasmin in the series, Aladdin-Naam Toh Suna Hoga.

She has also been a part of various music videos including, Kinne Saalan Baad by Goldie Sohel, Paagla and Hone Laga Tumse Pyaar. Apart from this she will soon mark her debut in a Bollywood film as a lead actress in the film Tiku Weds Sheru. Avneet will share screen space with Nawazuddin Siddiqui in the Kangana Ranaut produced film.

1 months ago I remember her as a kid who participated in DID Li’l Masters several years ago. It’s weird seeing innocent little kids grow up and become such attention seeking wh0res.

+ 14
1 months ago Is orange the new color in town? Anushka also wore orange swimsuit recently during her vacation.