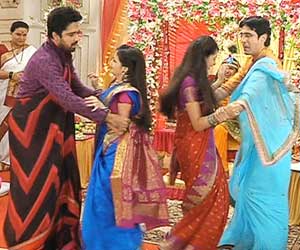 As seen in the show, Jyoti is expecting and is 7 months pregnant for which Aastha (Shrenu Parikh) will convince the Agnihotri family to organize a baby shower ceremony for Jyoti. Everything will be going well with the happiness all around which will soon fade as a tragedy will take place in the occasion. Jyoti (Sheetal Dabholkar) will escape from the tragedy and will be saved by Aastha.

Our source informs us, "All the arrangements will be done by Astha and everybody including Mrs. Agnihotri (Geetanjali Tikekar) will be seen happy for the function. But later will be disappointed and shocked as Jyoti will escape from an accident. Sulbhatai who is Abhay's (Deep Jaitley) aunt will also attend the function. She will hatch a plan and drop chandelier on Jyoti so that she loses her baby."

Elaborating more on the track our source says, "Astha and Sojal (Shalmalee Desai) will be seen performing on the song from the film English Vinglish Navrai Majhi Ladachi. As it's a ladies function, no male person is allowed to be a part of the celebration. Thus Shlok (Avinash Sachdev) and Varad (Samir Sharma) will make a plan to be a part of the function to see their beautiful wives dancing. So they will drape a saari and will cover their faces by veil but after seeing their wives dancing they won't be able to control themselves. So even they will start dancing with their wives and thus their identity will be revealed. All the ladies will laugh out loud and four of them will continue to dance."

"The entire happy moment will came to an end as an accident will take place where a huge chandelier will fall on Jyoti and Aastha will notice it. Immediately she will rush towards Jyoti and will save her. Later it will be revealed that the person responsible for this incident in none other than Jaya as she wants to kill Jyoti's child as she is carrying a baby girl in her womb," concludes our source.

Will Jyoti face a miscarriage? What will be Mrs. Agnihotri's reaction on the incident? Will she support her daughter?

+ 2
6 years ago Avinash Sachdev and Samir Sharma looking so funny.