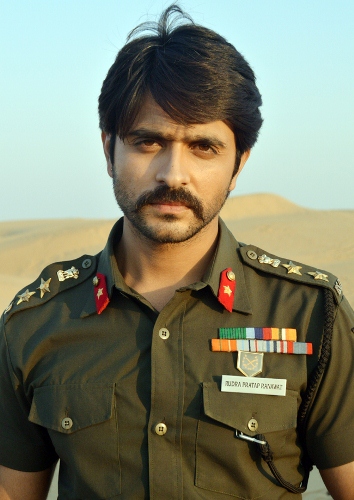 Popular actor Ashish Sharma who is seen essaying the character of Rudra in Colors' popular show Rangrasiya and simultaneously shaking his leg in the dance reality show Jhalak Dikhhlaa Jaa Season 7 will be seen donning his look from the show and shake his leg on the show. 3

Yes, you all heard it right! Ashish Sharma will be seen performing in a patriotic song. He will be seen as a major saab on the dancing show.

Now all Ashish's fans would be on cloud nine to see him back with his brooding look and donning the khakhi dress again.

Well it will be a treat for his fans to watch Ashish Sharma in a rugged look and doing hip hop form!

Haridas 6 years ago Ashish Sharma thank you for making Rudra so powerful and unforgetable.

rudrasa 6 years ago You were brilliant as Rudra, God bless you dear keep rocking our TV screen.

arniepervaiz 6 years ago all the best ashish..
hope u win the trophy..

nafeesaeed 6 years ago wow v have seen its amazing performance..RR is going to off air its not gud how v can c him n where????jaldi kisi or serial main aa jaao please...if possible to join BB u can win easily itni dashing personality everybody ll vote u...its message for Ashish the gr8

Zaara.H.Khan 6 years ago You really impressed and surprised me by your versatility.. I'm eagerly looking for your next project but don't come up with any old hag ..

esha85 6 years ago Just watched the act on JDJ...he rocked as major saab...Love you Ashish Sharma...i hope he gets the trophy!

deepa.e 6 years ago wow so so so happy about it! more eager to watch it!
Hope u are doing well now!