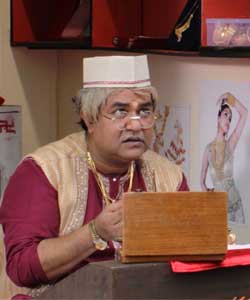 Ashiesh Roy who is currently shooting for Colors' Sasural Simar Ka is all set to play a goofy jeweler named Dharamdas on Sab TV's Papad Pol. His character will have various shades and will be mainly seen chasing Vinay (Swapnil Joshi) for money.


Ashiesh's association with the channel goes back a long way after which he made a smooth transition into serious roles like Anna in Mr. & Mrs. Sharma Allahabad Wale. "After playing a serious character in Sasural Simar Ka, the only driving force behind me doing Papad Pol is Vipul Shah. He is not only a good friend but also a great humorist. His shows always make me smile. Also this show has such amazing actors that it is my privilege to be in the same room as them."


When pushed further, the actor reveals another special reason for accepting the role. "When I was narrated the character of Dharamdas, it immediately reminded me of the jeweler in Gulzarsaab's classic film Angoor!" explained Ashiesh. "And that role was played by my senior from college, the late Mr. T.P.Jain. I did not even bat an eyelid before accepting the role. This is my humble tribute to Mr. Jain, who was a wonderful actor, intellectual, and above all, a great human being." The track of this character is not limited to just an episode but has been increased further.


While the fate of show still remains a mystery, the channel is contemplating to change its time slot or pull the show off air. Sab TV's new show Dont Worry Chachu replaces Papad Pol at 7:30pm.


So Ashiesh Roy fans, it's time to rejoice!

upra 8 years ago Awesome Ashiesh!! Hope you have a better role in papadpole

LoveTVShows 9 years ago he already entered the show 2 weeks back and just yesterday his role ended . TB baasi khabar, we want new news not old news. any news about balaji new shows .

-KingAragorn- 10 years ago Thank God it's over! now get away from the media for good!

sweet_angel27 11 years ago We all knew this was going to happen good choice rakhi :) congrats to both rakhi and elesh

neh91 11 years ago its obvious....he is NRI...is well educated....has his own business....ofcourse she was going to choose him....i think everyone new dis...n I just hated da way she was acting during her swayamvar.....she is nothing but a show off...anyways...just hope she keeps him happy..god bless her

bwoodlover01 11 years ago pretty obvious. elesh= NRI, good looks, decent, rich and great on-screen personality. what else rakhi want? if not marriage, atleast she chose her 'swayamvaar' at the finale. what quality time is she talking about? of how many years man?

angeleyesz 11 years ago i guess she mightve chose him because hes a business man in TORONTO
i mean .. i live in toronto and ive seen people do anything to get here and be rich.
so watever ..its her choice

Kangana Ranaut tried to mock Deepika, Sara and Shraddha for ...
15 minutes ago

Rhea Chakraborty did not name any Bollywood actors during ...
49 minutes ago