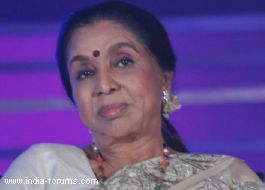 Legendary singer Asha Bhosle, who turns 80 Sep 8, wishes for love and support from her audience and fans for the rest of her life.

"Only one wish is left, that whatever love I have, it should stay with me till my last day," Bhosle said at a birthday celebration organised Wednesday evening.

Stalwarts from the music industry including Anu Malik, Sulaiman Merchant and Sukhwinder Singh were at the event to wish Bhosle.

On his own personal experiences with Bhosle, singer composer Anu Malik described how she helped in his career.

"I remember when I was 16, I went to her place. She made me have tea and asked me why I had come. I told her I want her to do a song for me. She was so busy but still took out time and agreed to sing my song. When she said yes I will sing for you, I can never forget it. She has helped so many singers like me," he said.

"I hope she lives for 1,000 years. It is tough to get someone so talented again. So many songs come to my mind when I think of her," he added.

Sulaiman Merchant, after working with Bhosle in reality show "Indian Idol", said he feels lucky to have spent so much time with her.

"I connected with Asha ji so well in 'Indian Idol'. I think I am lucky to spend so much time with her and learn so much from her," he said.

Asha Bhosle will also be making her acting debut this year with Marathi film "Mai".

Asked about her experience in the film, she said: "You should all see and tell me how I am. All I can say is that if every girl doesn't cry when she sees the film, then I will change my name."

Veteran actor Manoj Kumar, who was also present, said he had seen the film, and congratulated Bhosle on her good work.

"I have seen her film, I told her that why didn't you work before, so she joked that I never gave her work before," he said.

Directed by Mahesh Kodiyal, the film also stars Padmini Kolhapure and Ram Kapoor. It is set to release Nov 23.