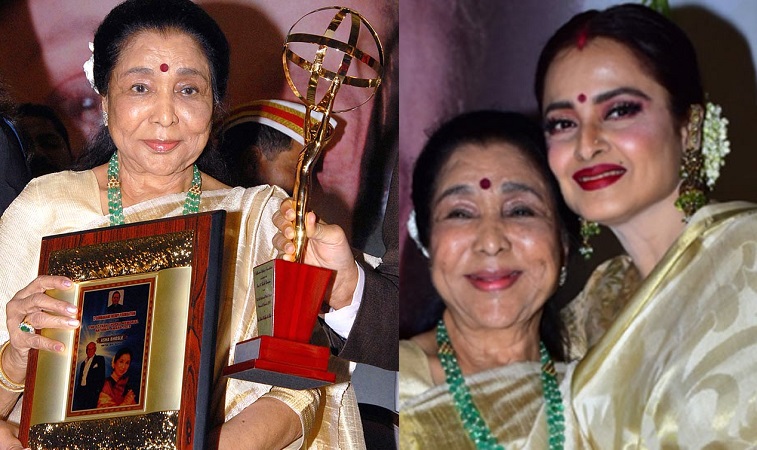 Maharashtra Governor C.V. Rao gave away the award to Bhosle, which has been instituted in the memory of legendary producer-director Yash Raj Chopra who passed away in October 2012.

The award -- carrying a cash prize of Rs 10 lakh and a gold bracelet -- has been instituted by philanthropist and MP T. Subbarami Reddy, in association with Anu Ranjan, President of Indian Television Academy, and Shashi Ranjan, Chairman and Managing Director, ITA School of Performing Arts.

"Asha Bhosle is one of the most versatile playback singers who has sung different genres of songs such as 'Lavni', ghazals and Pop songs with the same grace and perfection as she rendered devotional songs," Rao said.

Paying tributes to her singing abilities, the Governor described her as "India's Ambassador to the world of music" and lauded her for taking Indian music to the global stage.

In her reply, Bhosle recalled her long association with legendary Chopra whom she likened to "a younger brother".

"It is unfortunate that he is not her any more. I was associated with him for nearly 50 years, even before he was married. Once I complimented him on his choice of songs and melodies and said his 'ear for music' has greatly improved with time," she recalled.

She continued: "At that time, Chopra shared his secret with me, with a request not to tell anyone. He said actually it was his wife Pamela who decides the songs in the films. So I added, no wonder, your taste in music has only got better."

Bollywood diva Rekha Ganesan said that she absolutely adores the Mangeshkar sisters who, amongst themselves, have sung nearly 90 per cent of all the songs in Bollywood.

"I felt my performances in films went up a notch because of Ashaji's songs. I would feel the pressures to match up to her soulful renditions and perfect my act. The constant feeling of having to meet her expectations also kept me on my toes and going always," Rekha said in her tribute to the singer, who sung many memorable numbers for her, including in "Umrao Jaana" (1981), which bagged six National Awards.

The previous recipients of this award are Bharat Ratna Lata Mangeshkar, Amitabh Bachchan, Rekha Ganesan and Shah Rukh Khan, all known for their close association with the late Chopra.