SaReGaMaPa Challenge ‘09 gets underway on July 4th under the guidance of a new set of Mentors/Gurus. But donning the role of the ‘Maha Guru’ for the first round of episodes will be the Melody Queen Asha Bhosle again!! 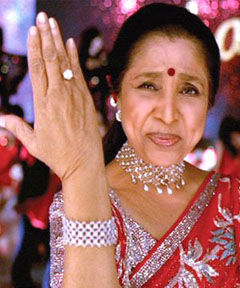 Featured Video
Telly Buzz contacted Ashaji who confirmed the news saying, “Yes I am going to be a part of the show again and am really looking forward to it.” So how does she feel getting back on the chair of Maha Guru? “It’s a nice feeling!!! Actually I like these shows. Be it SaReGaMaPa, or many other shows in so many channels, they finally give these young boys and girls a chance to show their talent. I would really love to and am looking forward to hear them out and judge them. You never know we might get a star from these very kids,” says the Maha Guru.

Now that every channel has some singing show or the other running, Ashaji feels it’s not bad as such. “See in one Marathi Channel, there is a show that is giving chance to people beyond the age of 40 years. It’s so nice that a person who may have a wish to showcase his talent gets the opportunity now even at this age. I would say media is doing a very nice job with these shows,” she replies candidly.

Even though she likes these shows, she feels they should make sure to keep it limited to singing. “The dancing cum singing shows needs to be avoided. No one can sing properly while dancing. You are bound to slip on “Sur” if you try doing that. In the recording studio, we don’t dance while singing, so why do it here? They think this way they can impress more but end up singing badly”, quips Ashaji. She goes on to add, “Another issue I am bit against is the way the contestants are made to dress up or rather would say decked up. Let them be their natural self and sing”. Ashaji echoes her views but then adds laughingly “But that does not mean this rule goes for me too and I won’t go there really well dressed.”

As much as Ashaji seemed excited to listen to the new contestants of this season, music lovers would also be very happy to see her again on the show guiding these contestants and passing valuable advises on music.

but this Saregamapa challenge 2009 isnt airing in usa yet, right?

plz someone tell me

14 years ago It was soooo boring last time...We need some new generation like Sonu or so..I know sonu is young and Asha jee has more expierince with all those things but still...

14 years ago yay ashaji is backk!! but wait when is gonna start airing??

14 years ago Ummmm @sabii
Aditya Narayan is hostin it

14 years ago Omgoshhh again.This is gonna be awesome.I loved last season when she told off Himesh and took pot-shots at him.Ahah those were the days!

+ 3
14 years ago i hope she's not too brutal towards these contestents lol...can't wait to watch!

[email protected] 14 years ago i haven't seen this show yet but it looks really interseting to me!!!!

14 years ago Interesting to see her again! She is a decent judge! Quick to praise, but is not shy to criticise either! Perfect!!!