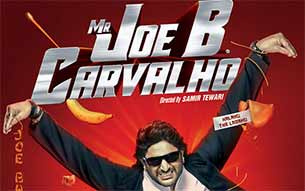 Actor Arshad Warsi, whose films "Mr. Joe B. Carvalho" and "Dedh Ishqiya" are ready for release, has set some "difficult yet achievable" goals for himself for 2014.

"Thank you, for making my 2013 a fabulous year. I have set some goals for myself for 2014, difficult but achievable. Need your prayers," Arshad posted on the microblogging site Tuesday.

"Mr. Joe B. Carvalho", directed by Samir Tiwari, will see Arshad in the role of a detective. The comedy will release Jan 3.

In Abishek Chaubey's "Dedh Ishqiya", which will release Jan 10, he will be seen in a rustic look alongside actress Huma Qureshi.
0 Likes

Before Death, SP Balasubrahmanyam Has Sung For Upcoming ...
14 minutes ago

Sushant's Family Displeased With Attention Being Diverted ...
16 minutes ago

After Ten Months Jacqueline Fernandez has Finally Re-united ...
26 minutes ago

Kangana Slams Anushka for Raising her Voice Against ...
53 minutes ago

'RadhaKrishn' Fame Vaidehi Nair Roped in For 'Brahmarakshas ...
58 minutes ago