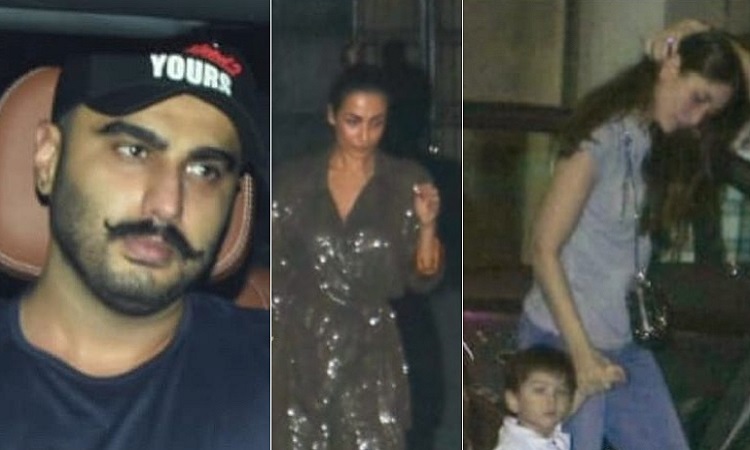 Like we have mentioned earlier as well, Kareena Kapoor and her girl gang party like no other in the industry. Their house parties are always interesting, Scoopy and hot in many ways. It's a stated fact that Kareena Kapoor, Karisma Kapoor, Malaika Arora and Amrita Arora love to party indoors and they often do the same.
Lately, Malaika's boyfriend Arjun Kapoor is also seen in attendance where he also gets an opportunity to bond with Malaika's best friends. This time around, the gang partied at Amrita's residence and her sister Malaika and her BF Arjun arrived at the venue separately to avoid any paparazzi's glares.
Also, there was a new member who gave a surprise visit and it was no one else but Kareena's popular son Taimur Ali Khan. Yes, he accompanied his mommy to aunt Amrita's home and the shutterbugs were quick to click them.

Speaking of their attire, while Malaika Arora glammed up in a shiny pantsuit for the night, Arjun and Kareena took the casual route. Though Kareena enhanced her casual look by completing it with jazzy heels. Arjun, on the other hand, was snapped in his new avatar that he has donned for his upcoming film - 'Panipat'.

Shortly after arriving at Amrita's residence, Taimur Ali Khan was snapped in his car on his way back home. Baby Tim was spotted crying and we assume he didn't want to leave mom Kareena and her party. But, kids have a deadline and Kareena Kapoor sure knows how to follow it.

We are sure this night too was one hell of a party like all the other parties. Recently, the girls also had an early Christmas party where a picture of Malaika and Arjun getting cosy went insanely viral on the Internet. Here:

It was just last week, when Amrita Arora, Karisma, Soha and KJo were seen partying at Kareena's Bandra residence. The inside pictures revealed how Kareena was the gorgeous host while the gang partied hard. 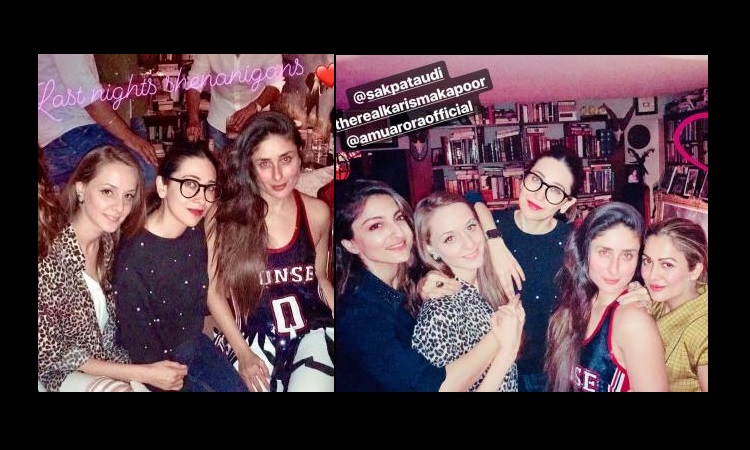 Kareena and her Gang in Four More Shots Please 3? Amazon Reacts with a ...

Karisma Reveals How Tough it has been for her Not Seeing Taimur, ...

Gulki Joshi: I can understand the stress the cops go ...
16 minutes ago

review
Review Gangs of Filmistan Promo: Sunil Grover is the highlight of ...
21 minutes ago

Pooja Bhatt Hits Back at Trolls as Sadak 2 Trailer Trends ...
33 minutes ago

Janhvi Kapoor sends love to 'mumma' Sridevi on the late ...
40 minutes ago

Why is Bollywood quiet? asks Shilpa Raizada on Sushant Singh ...
55 minutes ago

Sushant's Sister Makes a Heartfelt Plea to Everyone with ...
an hour ago