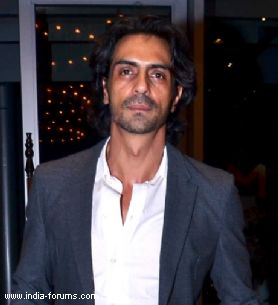 Prateik Jain, who won the first edition of Provogue MensXP Mr. India 2014, is inspired by model-turned-actor Arjun Rampal and says he looks up to him as an example to be successful.

"Arjun Rampal has got an amazing charisma and he is very charming. I take inspiration from how he carries himself. He is a perfect example for me," Prateik told IANS from Mumbai.

He will now represent India at Mr. World 2014 pageant to be held June 15 in Torbay, Britain.

His moment of glory and victory was made more special when he receieved the winner's trophy from Arjun himself.

The 25-year-old from Bangalore left his job as an investment banker to pursue his love for martial arts. He says the shift from a high-earning profession to a glamorous one wasn't easy.

"I was not into modelling before. I worked as an investment banker, but then I realised it was not my cup of tea. Then I started martial arts and then that passion turned into a profession."

"I used to fight a lot while training and this ended up in getting me injuries. Doctors advised me bed rest for six months, but my strength and will power made me follow my dream," he said.

While most successful models are paving their way into filmdom, what's Prateik's plan?

"The only thing that is running in my mind right now is the Mr. World title. If I get that title, then surely I will enter Bollywood," he said.

The first runner-up title of Provogue MensXP Mr. India 2014 went to Puneet Beniwal from Delhi and Bharat Raj from Chennai was the second runner-up.