Arjun Bijlani who plays Mayank in Star One's Miley Jab Hum Tum has dislocated his shoulder recently while he was shooting a fight scene for the show. 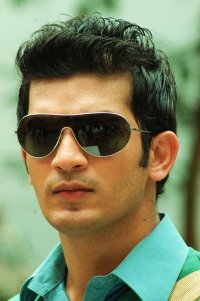 Featured Video
The actor was at the doctor's when we called him yesterday. "I was shooting a fight sequence when all of a sudden my shoulder snapped and came out of the socket. I was in terrible pain and could not even move my hand. But then, the cameraman somehow managed to push it back into the socket and I continued with the shoot. In fact, he had to push it back twice as it came out again after few minutes", quips Arjun.

The actor was so tired after the day's schedule that he could not see a doctor the same day. The next day he had to resume shoot as they were working cut-to-cut. "I packed up from shoot just now and I am waiting at the doctor's place. I have to get an MRI scan done tomorrow. It needs to be seen whether it is a muscle tear or something worse", explains the actor.

Arjun has got a break of three days in which he has to get better. "I will not be shooting for the next three days, and I hope to get better by then. But if there is any complication, I heard I might have to undergo physiotherapy for the next six months", says a worried Arjun.

In Miley Jab Hum Tum, the track is poised at a point wherein Mayank and Nupur (Rati Pandey) are slowly but steadily falling in love..

We hope Arjun is fit and fine soon, so that we can see more of Mayank-Nupur awesome chemistry on screen!!

Debal10 13 years ago get well soon, arjun.
we all are praying for ur quick recovery.

allallbmine_1 13 years ago plz get well soon .me and my friend is wishing for ur health .next time be more careful.i know the cameraman pushed it back in the socket just to help but it still is cruel and painful.plz take caare of ur self and ur fans dont want to hear any mishaps done to ur or the whole cast of the show.plz take the right medicine and take complete bed rest for some days so that u can heal quickly becoz we dont want to watch mjht without u in it.

13 years ago I hope it isn''t that serious as it sounds.
Hope he gets well soon.

13 years ago he is very cute,handsome.Ilike him in MJHT as mayank''mayu''.and also in REMIX &LFL. GET WELL SOON MAYU.

my prayers r al ways with them

13 years ago that sounds really painful! i hope he gets better soon.