COLORS and Rajan Shahi's Maat Pitaah Ke Charnon Mein Swarg will see for the first time, the old and the new Suhani (Archana Taide and Megha Gupta respectively) shooting together. 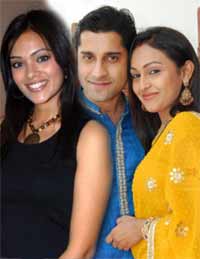 The coming episodes will have a dream sequence wherein Shubh (Pracheen Chauhan) is imagining the original Suhani (Archana) around him. Archana Taide was called by the production house to shoot this particular sequence.

According to our source, "This is a dream sequence wherein the romantic number 'Koi  Faryad' from Tum Bin is played in the background, and Shubh sees Suhani in front of him. They dance together to some simple and subtle choreography. On the other hand, the present Suhani (Megha Gupta) is also moving around in Shubh's house as she feels the place to be familiar to her. She is in deep thoughts, and remains clueless about her real identity. At the end of the song, Shubh is happy to have got back his Suhani, but she vanishes into thin air. This is when he yells out her name, and there comes the present Suhani in front of him".

Archana Taide when contacted, expressed her excitement on being called again to the Swarg sets. "I got a call from the production house and was told that I will be required for a day to shoot a romantic song. I got a grand welcome from everyone, starting from the spot dada to the directors to my co-actors. It was a great experience working with Pracheen again. In fact, Shubh and Suhani never had any romantic moments before, so I enjoyed shooting every scene of this. I also met Megha Gupta on the sets, and she is a very nice girl".

Pracheen too speaks about the romantic scene and says, "Shubh is hallucinating and feels the presence of Suhani around him. But he does not know that the real Suhani is just there in the house with a new face. It was a nice song sequence and has come out well".

Megha Gupta tells us, "This was a very important sequence involving both the Suhanis. The real Suhani (that is me) finds the place very familiar; at the same time Shubh feels that Suhani is around him. This is where the dream sequence comes with the old Suhani. At the end of it, he calls for her and I come in front of him".

Catch the dream sequence of Swarg on COLORS..

halifax004 11 years ago i never liked chunky!!...he always use to follow malika....like a GLUE

'Billions' Renewed For Season 6
22 minutes ago

Sneha Jain of 'Saath Nibhana Saathiya 2' Sacrifices Her ...
39 minutes ago