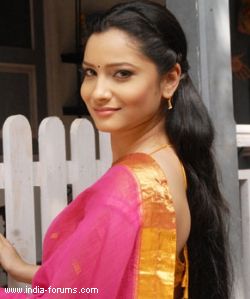 The news about Archana (Ankita Lokhande) being pregnant in Zee TV's Pavitra Rishta has already been reported by the media. The same fact will be kept aloof from Manav (Hiten Tejwani) and the first week of December will see the show taking 20 years leap.

"Though Archana will hide her pregnancy due to her sour relationship with Manav, it will happen so soon that Archana will cross her pregnancy period of nine months, staying with her mother and mother in law in a fast forward track coming up. On the other hand, Manav will continue to be adamant on his decision to stand against the chawl people," states an insider.

Another source says that, "Post nine months the final result will be declared that Archana wins the case against Manav and on the other hand Archana will also deliver twins on the same day. The show will also see the first birthday celebration of Archana-Manav's kids followed by a big fat the leap."

Ankita Lokhande remained unavailable for her confirmation on the same...

Well, its time to see new faces in the show!

stefanandre 8 years ago Ankita, I really wish you can quit this show; cannot imagine seeing you playing a mother to people older than you. You are a very talented and beautiful actress, please do not waste it in PR; there is absolutely nothing left, no story, no chemistry, nothing.

Tani91 8 years ago this is the final nail in the coffin...PLEASE Anki PLEASE leave this hell hole of a show...I seriously cannot digest seeing her as a mother to 30 year olds yuck

mandy0310 8 years ago Manav shouldn't have lost the case, Archana should have lost. That project was beneficial for all involved. Though this storyline Archana has been ruined. The leap is a waste of time. Just end the show

hiten_akash 8 years ago hiten is very good as manav,,
he is doing brilliant

Pinky1975 8 years ago Really shame on Ankita Lokhande for playing role of mother to 4 kids that to app. 25 year old. Shame on Ankita. Today I really feel ashamed of myself being a fan of such a pathetic actress. There is nothing remained in the show and in her character just to remain in good book of Ekta Ankita can do anything. Shame on Ankita.

sanw 8 years ago the show is going to run hay-wire. why do they want to do all this. I think now ankita will quit the show. & hiten should also quit. there is nothing left like 'pavitra' in this rishta!!!!!!!!

_mahi_ 8 years ago so the leads are against each other and they still call it PAVITRA RISHTA??? ekta you need to get some sleep to think of better story line..