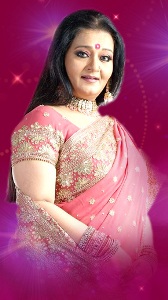 Tellybuzz  broke the news about the next season of Kitchen Champion, this time making a comeback with Ronit Roy accompanied by Smita Singh as the hosts.

The latest we hear is that Apara Mehta, who will be seen in Colors' upcoming show Hamari Saas Leela, will make an appearance in Kitchen Champions to promote the show.

A source says, "Apara Mehta will come as a celebrity guest in Kitchen Champions and will be seen helping Anandi (Pratyusha Banerjee) in the competition."

We also hear that Neha Prajapati, who will be playing Apara Mehta's daughter in Hamari Saas Leela, will also be coming in one of the episodes.

The new season of Kitchen Champion will launch on 23 May on Colors.

Apara and Ronit in a show again.. awesome fun! :D