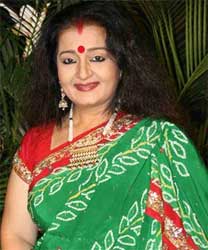 Apara Mehta aka Leela from Colors' Hamari Saas Leela is leaving no stone unturned in promoting the show and the lady will be seen attending the wedding of Dia (Simran Kaur) and Shaurya (Varun Kapoor) in Na Aana Is Desh Laado.

Our source says, "Apara Mehta had been to the sets of Colors' Na Aana Is Desh Laado today to promote her newly launched show. But the channel has not yet decided on whether sequence has to be aired or not, or just leave it as a publicity evet along with media."

We hear Apara Mehta will be present for the Jaymala function of Dia and Shaurya's wedding.

Will Jhanvi (Vaishnavi Dhanraj) succeed in her plans to get Sharya married to Diya? Will Leela's entry make a difference?