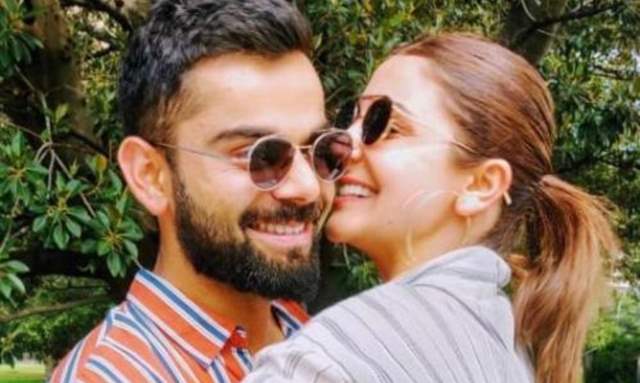 Celebrity couple Anushka Sharm and Virat Kohli have raised the love quotient quite high with their romance and companionship. After dating for a long time, the love birds tied the knot on December 2017 in a fairy tale wedding in Italy. Despite belonging to distinct walks of profession, the duo manages to make time in between their hectic schedules and spend some quality time together. They often share mushy pictures together which are a delight to their fans and create a joyous storm online.

While Anushka has been pretty vocal about her relationship, Virat on the other hand has always been hush-hush about his feelings. However, in a recent interaction with television sports reporter Graham Bensinger, he spilled the beans about his first encounter with the Sultan actress, their first date and marriage proposal, and also spoke about their honeymoon to Finland.

Virat revealed that he was nervous the first time he met Anushka...

“The first time I met her I cracked a joke immediately. I was very nervous and that’s why I cracked a joke because I didn’t know what to do. I was standing on sets and was being all nervous and jittery. I thought I was being funny (when I cracked that joke), and I said something which wasn’t probably the right thing to say. She is tall and she was wearing heels (makes a gesture which isn’t too much) and she was being told that I am not that tall, I am not 6 feet plus or something... she walked in with heels and was looking taller than me and I was like didn’t you get a higher pair of heels. Then she was like ‘excuse me’ and then I was like ‘no, I am just joking’. My joke became such a weird moment for myself. I was such a fool, to be honest. She was so confident, she is on sets regularly.”

Talking of the similarities between them, he said:

“She is also from a similar background as me. We come from middle-class families, made it in their respective careers, worked hard, got to a certain stage. In hindsight, when we look into our lives, they were going at the same pace but in totally different worlds. The timelines of my debut is 2008, the timeline of her starting her first film, shooting for it was 2008 August. We met in 2013 and outlives have been so similar in totally different worlds and then we got along so well. We were talking real things, we were talking things that a lot of people don’t connect with, only if you have seen that life will you understand what we are talking about. So the connect was there immediately.”

Details of their dates:

“It was pretty traditional; we would go out for meals. Eventually, you didn’t really have to ask out because both of us knew we liked spending time with each other. I don’t even remember when we thought ‘okay this is the time when the transition is happening’, it was so organic and natural. And it kept getting stronger and stronger. We knew that we just wanted to be with each other.”

Virat talked about how he announced his marriage to his friends:

Virat said how things were all so organized, it just happened. At that moment, one of his friends, seated with the crew, spoke about how Virat and Anushka’s friend circle knew that marriage would happen. So, once it so happened, they all got together at his home and he said that he needed to tell something to them. Then, he said that he is getting married and they were that ‘okay, we know’. And then he added ‘but in two months’.

Talking about how the wedding happened:

Virat confessed that everything was organized by Anushka as he was in the middle of a series. She figured the location and she mentioned pretty categorically that we had to keep confidential. He went to say how there were just 42 people at the wedding, just close friends and family and how top-level security setup was in place. They then had a celebration for her industry friends and for his cricketer friends. Once, these functions were done, their respective families said that it was a wise decision to have a wedding in Italy.

“So we go to Finland. We were hoping to see the Northern Lights but we just could not because it was snowing for all three days but we were just fascinated and taken aback with the whole place. It was pure and white and snow all over and so clean. There was literally no pollution and so few people around. Then we went to coffee shop once. So we enter the place and we are like okay this is one place where we haven’t met one person from India yet. We are not getting noticed by anyone. This pure freedom and suddenly I look around and I look in the corner and there’s a Sikh guy with a turban and I just looked away. I got my coffee and I was trying to hide from him. I told Anushka I saw a guy and she was like ‘no way, all the way in Finland’. Then that guy noticed us and came to us and said ‘so good to see you guys and my last name is also Kohli’. I was like what are the chances of seeing one Indian guy all the way in Finland and his last name is the same as mine. I was like when are we going to a place where we don’t get noticed at all. Yeah, but it was funny.”