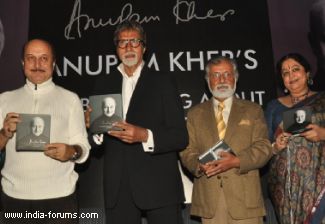 Anupam Kher is 'the most romantic man I ever met in my life', revealed Kirron Kher at the launch of the actor's book 'The Best Thing About You Is You'.

'He used to be very romantic. He was the most romantic man I ever met in my life... and listening to songs, he would sing them to me rather than listening to them,' the 56-year-old actress said here.

The actors, who met thanks to their love for theatre, tied the knot in 1985 after Kirron's separation from her first husband.

Kirron says Anupam has evolved as a partner in last 25 years and added: 'Anupam and I started as friends. I remember, every time I went through rough times, emotionally rough times, Anupam would always be there. In fact, Anupam had this strange quality of pulling me out of depression and making me feel much better... and that was not when we were in love, we were just friends.'

The national award winning actress was feted for her performance in Rituparno Ghosh's 'Bariwali' in 1999. Kirron's last Bollywood appearance was in 'Action Replayy' and she also judged the reality show 'India's Got Talent'.