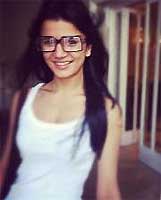 Tellybuzz has informed its readers about Balaji Telefilms new show on MTV India. The show is expected to be along the lines of 'Gossip Girls' and now we can confirm the name of the lead of the show -Annie Gill! She is a model who was last seen in Imagine's Zor Ka Jhatka will now be a part of Balaji's next on MTV India.

The show has been titled as 'Friendship Baazi' and caters to the adolescents and youth of India. Apart from Annie Gill, Fenil Umrigar is also part of the show. The show is about four teenage girls studying in Standard 12. The show focuses on their lives.

The show is expected to launch sometime near 'Friendship Week' in August.

KP_Marina 8 years ago what to say.She uses her own startegies.She turned a vampire into a human.What change she is going to do with gossip girls.

k_anjali12 8 years ago I dnt even today knew .. what her last series is about

she said like its a twilight one .. but lol its A MIXED Of every vamipre hollywood venture till now ... lol .. not even came from tht jatka .. now she is gonna back with "gossip girls" ... oh ekta ... spare us yaar .. pleasee

iramtheegr8 8 years ago oh cmon, lets see how it runs...well good luck for the show!!!

Aahaana 8 years ago They are going to ruin Gossip girl! God save GG from EK and BT=))

Mean.Girl 8 years ago the show which based on Gossip Girl.. plzzz spare Gossip Girl Ekta Mata.. u r gonna ruin it..