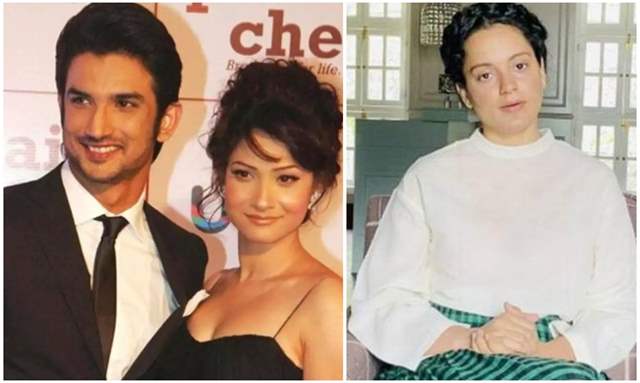 Kangana Ranaut has gone all out in the fight for justice for actor Sushant Singh Rajput. While the actor died by suicide on June 14 2020, professional rivalry and many other angles are being probed in the case. Kangana has demanded the Mumbai Police to summon and interrogate some A-lister names of Bollywood like Mahesh Bhatt, Karan Johar, Aditya Chopra among others.

Now in a recent interview, Kangana recalled her conversation with Ankita Lokhande, who was in a relationship with Sushant Singh Rajput for six long years. She claims that she called up her Manikarnika co-star, Ankita to speak about Sushant after his untimely demise and revealed details about their conversation.

“When I spoke to Ankita, she said right from the beginning, there was so much humiliation that he could not take it. This is how she summed it up.”

Sushant made it in Bollywood from the television world, after ‘auditions after auditions, rejections after rejections’, Ankita told Kangana. He remained ‘so grounded’ even after becoming one of the most sought-after stars in a short span of time. However, he was very sensitive to how he was perceived by others.

Furthermore, Kangana also stated how Ankita told her about Sushant’s suffering and how he could not handle the humiliation, ganging up and bad PR in Bollywood. She added:

“But one thing that she (Ankita) also said about him was that he was not thick-skinned. He would sit on Twitter when he was new and would fight with fans, asking ‘why did you think that about me? Why did you say that about me? I am not this person that you are saying.’ Ankita told me that she used to tell him ki abhi ye toh hoga na. Everybody will have their perception of you, why are you so bothered about it? He just could not take that, he could not take what people thought about him. She said, over a period, the bad PR, the ganging up, the public humiliation, he just could not take it. He has had enough – that’s what she said.”

Kangana said Ankita told her that Sushant ‘was a lot like her - intellectual kept away from gossip and passionate about his work’. She said, ‘Kangana, Sushant was exactly like you… he was very intellectual, he would not gossip about anyone, and was very invested in what he did. He had that small-town personality.’ But she said that ‘the only difference was that he wanted to be accepted. You somehow have gotten over that urge.’

Meanwhile, Sushant Singh Rajput’s last film Dil Bechara is scheduled to be released today on Disney+Hotstar at 7.30 pm IST. The film is available for all subscribers as well as non-subscribers as a tribute to Sushant. Directed by Mukesh Chhabra, the film is based on John Green's 2012 novel The Fault in Our Stars and marks the debut of Sanjana Sanghi.

VulnerableOP 22 days ago Kangana ended up in her own trap when she was summoned by the police, because she just had been baselessly talking when she actually had nothing to do with SSR at all. Now, she’s landed herself in an embarrassing situation

beingaditij 22 days ago Ankita can also come forward and tell this if it is true....why kangana madam is so eager to catch the opportunity

Abhigya.fan 22 days ago Absolute shameless opportunist. she spoke to Ankita? I call BS. this woman is nothing but a rank opportunist taking advantage of sushant's death to boost her own profile among sanghi right wingers. please shut the f*** up.