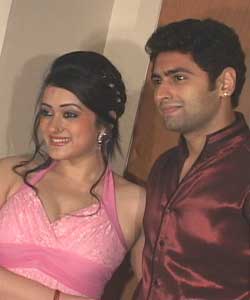 seems to be tension time yet again on the sets of Star Plus' Mann Ki Awaaz Pratigya, as few of the actors are unhappy with the budget rise they have got!!

We hear that Ankit Gera who plays the role of Adarsh and Monika Singh who plays Pratigya's mom in the show are a bit upset as they have managed to get only a 10% rise when compared to their initial budget.

Our source tells us, "Ankit and Monika have completed their one year contract for the show, and as per the procedure, the production house was to give them a decent increase in their salary. However, the actors are unhappy with the rise they have got, and are in talks with the production house for a better hike. The situation is dicey as of now, and both Monika and Ankit might decide to leave the show if they are not given a satisfactory increment".

When contacted, Ankit Gera told us, "I cannot comment on anything now; let's sort things out first".

However, Monika refused the buzz, and said, "It's not true. Nothing as such has happened".

We tried calling Producer Pearl Grey but she remained unavailable.

We too hope that's things fall in place the the Pratigya family remains united!!

1015 9 years ago why this kind of things are shown in indian tv shows. it is totally wrong

shabiheraza 9 years ago i m sure MKAP is making enough money to keep its cast happy.........

scribbler 9 years ago Hey...why is everybody pulling the legs of these 2......
let them hv their rightful hike...

razmaverick 9 years ago hey cvs.....
Why don't gv the couple their promised hike.....
After all they hv also contributed to the popularity of the show....

mesrkk 9 years ago jay trying to woo komal......does it point towards adarsh-komal split....
Another foolish twist?

Sid4TeamCanada 9 years ago don't care much abt nainaji.. but adarsh NEEDS TO LEAVE! :@ komal needs to be set freeeee!

mesrkk 9 years ago uggh.......
hey animals.....what's itching u if the poor couple is negotiating on salary....
It is their right to work on their terms......
These fuc...ng critics hv no right to oppose their demand...

Preternatural 9 years ago noo plz dun replace them......
they are fab actors

maggiesmith 9 years ago better pay them ya..afterall dis show is made of wonderful team..y to make them unhappy..atleast giv it to monika..even though shez too young to play mother but she still doez her job well..
Replacement wil only ruin d show..

ArjaAddict 9 years ago no comment at all on dem....i just want kriya in d serial!!!

Charvi Saraf is finally happy that her character got a ...
7 minutes ago

Deepika Says 'Maal' Was Code For Cigrarettes; Denies ...
13 hours ago