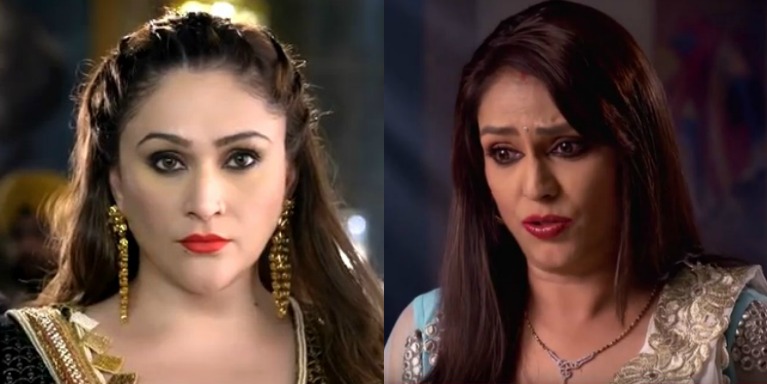 Tashan-e-Ishq has been in the news lately for its intriguing storyline. Just when we thought all is well here comes another shocker. Eva Grover, who plays Anita Luthra on the show, has been replaced.

Actress Anjali Mukhi, who is currently seen on Sony TV's Ek Duje Ke Vaaste, has stepped into Eva's shoes. We contacted Anjali who said, "I started shooting from the 27th of this month. The whole cast is amazing and welcoming. Especially Tanushree Kaushal who plays the role of Bebe. She is very sweet. I also shared the room with her yesterday."

Commenting on how she is juggling two shows at the same time she continued, "Dilip Sir and Vishal Sir were very accommodating and let me do it. They were not using all of my 20 days here and Tashan-e-Ishq required 15 days. This show kinda fell into my lap."

This will be Anjali's second negative character. She played the vamp in Ek Rishta Aisa Bhi. Says an excited Anjali, "I love my look in Tashan-e-Ishq. This is an all-out negative role complete with dark makeup and lipstick. My appearance is very striking. The whole look is very opposite to how I look in reality."

Anjali is essaying a grey shade in Ek Duje Ke Vaaste. On being compared in both shows she says, "my actions come after logical thinking. I am just a mother who is looking out for her son. She wants him to be successful and happy in his life. And she can be manipulative to achieve her goal. But she is not an out and out negative character."

We wish Anjali all the best for her future ventures.

6 years ago Love Tashan e ishq.
Sidhant Gupta and Jasmine Bhasin are doing an amazing job as Kunj and Twinkle.

6 years ago Better use an ice pack to soothe tha pain from those slaps, Tashan E Ishq such a rocking episode today. Vaishnavi McDonald & Jasmin Bhasin you guys were on fire!!!

+ 2
6 years ago Eva was better. But everyone is giving best. Sidhant Gupta and Jasmine Bhasin keep Rocking.

6 years ago I liked Eva :( She was sooo good as Anita Luthra.

+ 2
6 years ago Tashan E Ishq is amazing show, Get well soon Eva Grover you will be missed you played Anita amazingly good luck to Anjali Mukhi