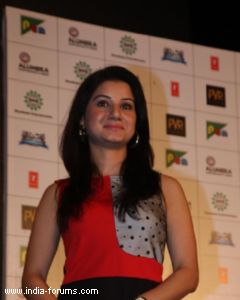 Anjali Abrol who was last seen in Devon Ke Dev. Mahadev essaying the role of goddess Meenakshi is planning for her fresh innings on small screen. The actress who has had a film release 'Singh Saab the Great' essays the role of Sunny Deol's sister Simran.

Talking about doing TV shows, Anjali says, "There are two daily shows in my kitty; one from Like OK channel and another from Sony TV. I'm yet to finalize which one to take. Also there are films which are in the pipeline. So let's see what I choose."

For Anjali it doesn't matter whether she gets to work in TV or Films, "The medium is not a problem for me. Wherever I get a meaty role, I'll opt for that show or film. Even the TV offer that I got is of an independent girl of today's world who also takes care of her family. It's not a typical bahu's role. It's just that I'm taking my own time to nail down the best project. Even for films I want a performance oriented role and not the one where I'm shown as a showpiece."

Anjali's fans have been waiting for long to see her on TV and many will be happy to see her back, "I know I've made them wait for a long period but they do know me. Whenever I take work, it has to be the best and I'm sure they'll not mind waiting little longer too if they want me to do good work," she says.

Coming to her debut with Sunny paaji's film, she explains, "It was a good experience to work with Sunnyji. He's a very down to earth and shy person. Also he did like my work in the film and has conveyed this to me personally. I hope to work with him again."

We ask her whether there are any changes on the personal front? "Now I'm able to take out time for myself and my family which is great. Earlier when I was doing TV, it was just my work but now I'm able to balance both personal and professional life," she quips.

Finally we all would want to know her relationship status? "Well currently, I just want to focus on my career and myself. I don't have time for Ishq, love or mohabbat. Though I have a huge crush on Sunny Deol but ahhh... he's like my brother," she giggles. "When love has to happen, it will. There is no particular time specified for it. The day it happens with me I'll let you know," she concludes.

Well Anjali, we wish to see you on-screen soon.

Jily 6 years ago you were fabulous as rani...

i miss that character thinking about it now

irene_c 9 years ago Djust seen the promo whille watchng no problem...this looks good. Lookng fwd to it n yes I will watch this just for abhi as well

haj1 9 years ago NO ONE can compare to Bourne Trilogy. NO ONE.

Amoli214 9 years ago Wow can't wait for this movie, i love Abhishek Bachchan!!!!