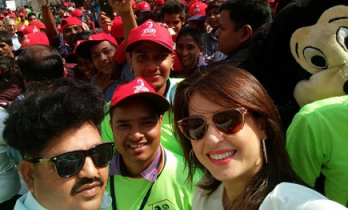 Model-anchor-actress Amrita Raichand who is hosting a cookery show Mummy Ka Magic on FOODFOOD Channel invested her time for a noble event. She was the judge of honor for  the Bosco Mela supporting 2,000 children. Well, along with Amrita, actor Salil Acharya was too present for this honorable event.

Our source informs us, "The unit of Bosco Mela invited Amrita and Salil for the inauguration of their institute for 2,000 children. The institute supports under privileged children."

When contacted Amrita she says, "I felt very nice after meeting those people and had a great time with them. I visited the Mela, spoke to many children and clicked selfies with them. All in all, I got to spend quality time with those under privilege children."

Well, wasn't that a sweet and noble gesture by Amrita?