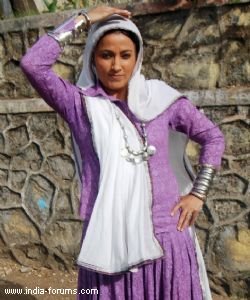 Viewers of Na Aana Is Desh Laado will get to see a high point in the coming episodes where Ammaji (Meghna Malik) will be shot by Bhanupratap (Amar Verma).

According to a source, "As per the present track while Ammaji is hunting for Diya (Simran Kaur) and Shaurya (Varun Kapoor),  Bhanupratap has also sent his goons to kill Ammaji's son in law. But he is not aware that it is his own son Shaurya who has married Diya. And in a heartbreaking chase when the goons shoot Shaurya, the bullet hits Ammaji accidentally."

Will Ammaji survive the bullet? Will Bhanupratap come to know about the reality about his son?

Watch all the twists and turns that will grip the audience to the screens in Colors' Na Aana Is Desh Laado.

vaiku 9 years ago even if 1000 bullets r shot, the gr8 ammaji will nt change! :/ want shaurya-diya, jhanvi, karan and his mom, aditya and ragini to live happily.. dnt care for ny1 else.! :/ let them go to hell! :/ want jhanvi's chacha to come back.. to protect diya-jhanvi...!

DEBALINA1 9 years ago why not they stop the show, when they have no new things to show

.SilentPrincess 9 years ago Wow thats new...
Amma jee has been shot N number of times before...

Don't they have anyythig new to show...than repeting old scenarios...

-Preeti- 9 years ago hope she doesnt survive ... this female is annoying now

sali195 9 years ago I really hope that ammaji dies once and for all, so that dia, jhanvi and the others can finally live in peace. But unfortunately the chances of that happening are like one in a million, if she dies then i guess the show dies 2. Well having said that they should end this show after amba's death this show just fails to entertain me.

Rakul Preet Singh confesses to being a part of drug chats ...
27 minutes ago