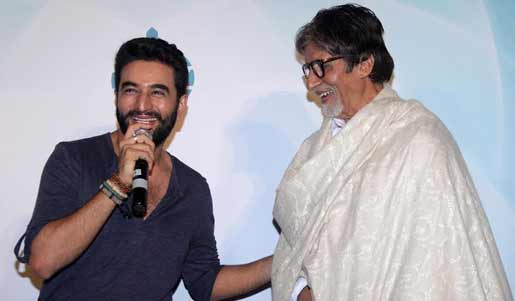 Shekhar Ravjiani's melodious and heartfelt rendition of The Hanuman Chalisa was launched today by Sh. Amitabh Bachchan at an event in Mumbai.

After three very successful singles, Saazni & Saavli in Marathi, and Butterfly in Telugu, Shekhar's fourth single, Hanuman Chalisa is a beautiful, meditative interpretation of the prayer that was written by the poet Tulsidas and has been loved and revered by many generations. Aiming to appeal to the youth, not only is the song more meditative and lounge-like in its feel and tone, Shekhar has composed and sung it in a very mellow and soulful manner, making it a very soothing version of the usually high-tempo Chalisa.

"I'm extremely honoured and grateful that Mr. Amitabh Bachchan has taken time out of his very busy schedule to make this occasion truly special and complete for me. If my rendition of the Hanuman Chalisa can give people a sense of peace and calm in their stressful lives and remind them to always keep the faithto always believe, that would make me very happy." says Shekhar, who's composed more than 400 songs for Bollywood soundtracks as one half of the Vishal-Shekhar duo and has also sung some very popular and award winning playback numbers. "This Chalisa is more spiritual than religious in appeal, making it more relatable for everybody, especially the youth," he adds.

To make sure that the prayer reaches more people, Shekhar has also conceptualised a special edition pocket book which has an introduction to the Hanuman Chalisa, the prayer and its meaning in English along with a note about Sant Tulsidas.

Additionally, an exclusive mobile phone app has been developed for people to be able to download the Chalisa and its meaning on their handsets making it readily accessible for them.

The music video of Shekhar's Hanuman Chalisa has beautiful visuals that bring alive the song and prayer through illustrations of the different avatars of Hanuman, presented in very earthy tones.

This clutter-breaking single is sure to give the listener a sense of peace and calm, dispelling all fears and filling their heart with faith. Shekhar hopes the power of the Hanuman Chalisa touches the hearts of as many people as possible, making them feel the peace and share the love.

The single is being released under the Zee Music Company label.