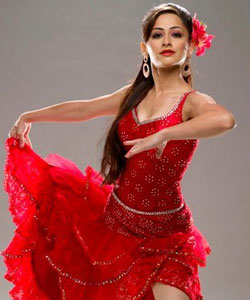 New Delhi, Jan 11 (IANS) Wedding bells are set to ring for actors Amir Ali and Sanjeeda Sheikh in March. The excited actress says she was left speechless when her long-time beau popped the question to her after a hard day's work.

'I wasn't expecting a proposal from Amir that night, especially when he had waited long hours for my shoot to get over and I too was drained after giving back-to-back high-intensity scenes that involved portraying a lot of mental trauma and crying.

'As I came out of my shot, there he stood in front of me, went down on his knees and proposed marriage. That was it, the moment of my life,' said the 27-year-old.

'I don't have words to express how am I feeling currently. It's so special and amazing that our relationship is culminating in marriage very soon,' she added.

Amir, who teamed up with Sanjeeda for dance reality show 'Nach Baliye 3', is equally upbeat about the D-day, the date for which is yet to be finalised.

Divulging details about his proposal, he said: 'I asked her to marry me gifting her a customised diamond engagement ring and then took her out for a romantic dinner date. All the while she was speechless and just flowing in the moment and when she finally accepted the ring, the moment was so intense that both of us had tears in our eyes.'

For now, Sanjeeda has started shooting in double shifts for 'Piya ka Ghar Pyaara Lage' to make up for shooting schedules she would miss due to her wedding, especially since both of them have plans to host an elaborate sangeet and mehendi ceremony.

Aamir Ali to play one of the lead roles in the Indian adaptation of ...

shaenarai 8 years ago congratulations amir and anjeeda... you make a very cute couple...

KTYM.RBO 8 years ago So happy 4 them and congrats to both of them.
Good luck and they make amazing couple, wishing them all the best :D

BayAreaGuru 8 years ago I wish both of them a happy and blissful married life :)

Sun7shine 8 years ago They make such a cute couple

Congrats to both of them

Angelicprinces 8 years ago wow! so finally they r getting married :D i'm happy for them.they make such a cute couple together.best of luck!!

ZahariliBichoo 8 years ago Best thing about this Couple is they keep their life PRIVATE. No Show Bazi, God bless you both

GoDsLoVe 8 years ago Awww, dats so sweet, may god bless them both, may they have an awesum life ahead... :))

Naagin 5: Sharad Malhotra talks about romantic scenes with ...
42 minutes ago

Akshay Mhatre talks about the importance of a mother's hand ...
53 minutes ago

The Dispute Between Gabrielle Union & 'America's Got Talent' ...
13 hours ago
View More
TOP