It may not be the age for Mohinder Amarnath to bowl maiden overs on the trot, but the man who is almost touching 60 has been keeping the 'Teen Deviyaan' on their foot in Jhalak Dikhhla Jaa 3 with his dancing prowess.

According to our source, "This week Mohinder performed on the very sensuous number from Garam Masala 'Kiss Me Baby', and his Samba form of dance impressed the judges like never before".

"However, every time Juhi felt he was reciting his couplets for her, it was actually meant for Saroj Khan. Saroj Khan who was gifted Mohinder's lucky handkerchief last week gave her share of compliments this week, as she parted with her trademark hundred rupees note. Well, if this was not enough she was heard saying, ' I am fida over you'".

"Juhi and Vaibhavi were also thrilled with his performance, and in fact Vaibhavi shared the dance floor with the cricketer as she grooved with him", adds our source.

For now, it looks as though the mutual admiration club of Saroj ji and Amarnath seems to be making waves… 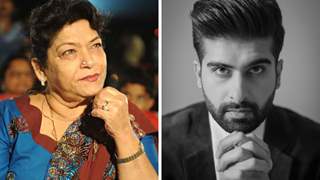 “Saroj Khan didn’t have work for a long time, told me to get events ...

12 years ago it''s nice to see so one at the age that he is at can still move and groove to all the beats..better than some on the show right now

+ 4
12 years ago OMG i can breathee...thank u for confirming u were lying... but plz dont do that again...i was worried all night :p

+ 3
12 years ago u scared me tomnjerry.dont do this again. yaar .we all got in tension.its not that we dont c others but the thing is we love karan more than others

+ 3
12 years ago what the heck is everyone talking about? There is no mention of KSG in this article...

12 years ago Who said karan got the lowest points? we need a proof!

+ 3
12 years ago hey if pls send us karan performance details waiting eargly for it. Thanx love u karan

+ 2
12 years ago I think he is really sweet, reminds of my grandfather. I DONT MEAN THIS IN A BAD WAY!!