View Profile
The government would make all possible efforts to make India a major international filming destination, Minister for Information & 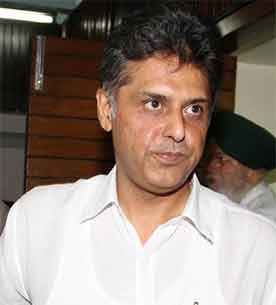 The ministry had taken certain concrete steps to put in place a mechanism, which would facilitate international as well as domestic film producers, said Tewari at the launch of six-day Centenary Film Festival at Siri Fort auditorium here.

He said that the single window mechanism of the Inter-Ministerial Committee for Promotion and Facilitation of Film Production in India would ensure the removal of all possible hurdles and lay down a timeline for different agencies involved for granting clearances for film shooting in India.

To encourage filmmakers from different streams, the filming of features, shorts and TV programmes had been included in the ambit of the Inter-Ministerial Committee.

Tewari also said the government was committed in restoring the rich legacy of Indian cinema, for which the National Film Heritage Mission had been launched.

He further stated that the ministry looked forward to the recommendations of the Justice Mudgal Committee that had been constituted to identify the contemporary requirements of film certification.

Regarding the festival, he stated that the objective was to take India's rich film heritage to the common people and facilitate the screening of classic masterpieces by famous Indian directors.

Praising the film industry he said that Indian Cinema had a unique and unmatched identity. The medium had undertaken a technological leap from the black and white silent era films to 3D.

Cinema over 100 years had captured different moods and phases of development of India as a Nation in a subtle yet realistic manner. It had proved to be an extremely powerful medium in the journey of reflecting aspirations and dreams of its people through a journey of love and hope.

The six-day festival, which includes screenings of some classics as well as contemporary Indian films by master directors such as Bimal Roy, Guru Dutt, Shyam Benegal, Adoor Gopalakrishnan and their ilk, is being celebrated in Siri Fort as well in venues such as Jamia Milia University, Jawaharlal Nehru University and India Habitat Center.

A special Satyajit Ray retrospective and display of artwork of Ray, pays homage to one of the best-known ambassadors of Indian cinema.

A Play on the life and times of Dadasaheb Phalke by Aamir Raza Hussain would mark the end of the festival in Siri Fort on 30th April 2013.