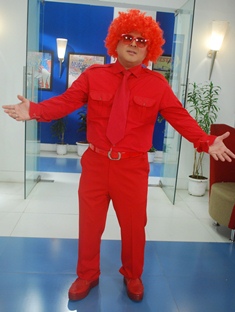 Jeannie Aur Juju is a romantic comedy which shows Vicky and his genie, Jeannie in a relationship and their tryst with life.

In the ongoing track, Vicky played by Ali is accidentally affected by a magic spell which changes his appearance from normal to different shades of red, blue, green etc. Ironically, the change in color also affects Vicky's mood patterns which change in sync with the colors viz. red makes him angry and blue makes him calm while green makes him an envious person. Jeannie played by Rubina Dilaik was impressed with Ali's acting skills during this particular track.

Rubina said, "Ali is a fabulous actor and he capably pulls off different types of acts in our show. The ongoing track consists of both physical and mental challenges as Ali's look will change drastically and his mood swings will be affected in Vicky's role. Ali impressed everyone on the sets with his acting prowess. He even joked about the act by saying that he got to play Holi once again."

Watch Ali change colors and his moods in succession on Jeannie Aur Juju.

vinianil 6 years ago Rubina Dilaik and Ali Asgar you two are excellent actors...JAJ is very entertaining...

N025 6 years ago Rubina Dilaik and Ali Asgar... a formidable combination! Good luck with the show

Tazzi 6 years ago Rubina Dilaik praising Aliasgar for his acting skill,
a very funfilled show,JAJ
Rubina is herself a very good actress. love her very much as Jeannie

flowerlilly 6 years ago Rubi your fabulous actress .rocking as jeanni.

Valini 6 years ago Enjoyable track, loving Ruby in comedy too

sunshineglow 6 years ago Rubi good luck whatever you do.love and support always with you.

flowerrosa 6 years ago Rubi looking beautiful in the pics.love you alot.