View Profile
They have in a true sense after tying the knot, been there done it all. From past affairs, playboy impressions, dips in career to setting a home, making a family and parenting wonderful kids, Akshay and Twinkle have stood the storms, which now have left a paradise of calm.


If what they say about 'Behind every successful man is a woman' has to believed, this couple makes it hard to defy! Twinkle, who never touched a peak in her career, has been quite the contrary in her luck and achievement as a home maker. And perhaps thats why, despite all rumors, true or false, about Akshay's astray nature, or smoke about the marriage falling apart in previous years have faded into a past.


The couple is warm, charming and most recently very glamorous! And so, L'Official with a pretty picture on its cover, has cast them for their main story for the September 2009 issue. There is a center splash of several snap shots in addition, which Twinkle in particular was heard to be excited about.

Said she, "Our main motive is to have these pictures for our grandkids. One fine day, we will show them these and say, see we were young and glamorous once."  Long term thinking, right there! 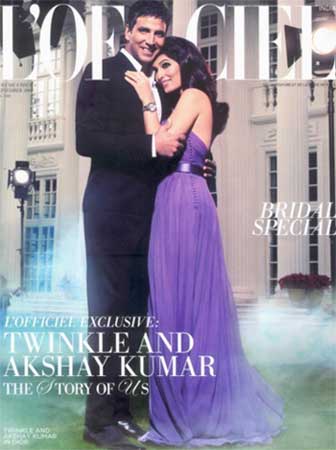 
All said, its time for the ardent fans, to go grab their copies and catch with the inside buzz of this maturely, forever in love, blessed couple!