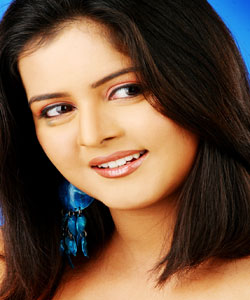 We all may remember her as Rashi of 'Mere Apne'  on 9X, and as 'Chinky' (cousin of Gunjan and Nupur) of Star Ones' Miley Jab Hum Tum.

According to our source, "Akruti will be shown as a big Bollywood buff. She migrates from Allahabad to Mumbai with her brother's family with a sole motive to get into movies."

When contacted Akruti she confirmed the news saying, "Yes, I'll be playing the character of Rajesh Kumar's younger sister. She is a very bubbly, innocent and cute member of the family. My character name is Ragini and I'll be seen as a big Shahrukh Khan fan."

Why make a comeback with a comedy show? To this she explains, "I wanted to be a part of a show that stands out from the daily soaps and 'comedy' got me quite convinced, so I decided to take it up. Though I was apprehensive in the beginning now things are different."

When enquired about her future projects she said, "I was offered a role in Star One's serial 'Geet' but I refused it. So right now I'm just concentrating on the SAB TV show. Apart from television I have also shot for a movie named 'Zara Sambhalke'. It's an offbeat movie based on the concept of 1995 Lahore earthquake. I play the character of a social worker. It's expected to release in a month or two."

Akruti who was apprehensive at the beginning is now very excited for the shooting of Mr & Mrs Sharma to start soon.

Nikki_Titli 10 years ago all the best for her...she ws vry sweet as chinky...

Vishal Bhardwaj on How People are Trying To Malign Bollywood ...
10 minutes ago

Sunny Deol To Make a Netflix Project With Son Karan Deol?
12 minutes ago