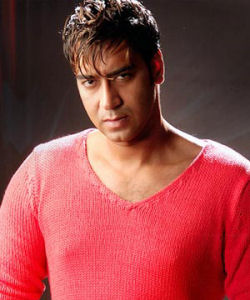 Ajay Devgan - the name is no more reminiscent of a 'hindi movie romantic' or an 'action hero'.


Ajay of recent times has been hitting jackpots of success the laughter therapy way - that is, via his rib tickling comedies.


With a peer competition on the rise each day, it was a gamble for Ajay to have chosen a string of comic scripts, including, Golmaal, Golmaal Returns (the sequel), All the Best (for his home production) and the very recent - Atithi Tum Kab Jaoge? But luck sure has obliged his hard work generously!


His latest film, has been fairing well enough, despite mixed reactions, and Ajay has continued riding high.


Prior to the release of this latest movie, however, he had explained how ATKJ despite belonging to the comic genre was a tad subtle and not precisely in league with his previous movies at that. The demand of scripts like Atithi Tum Kab Jaoge? are easier accomplished being himself, Ajay said, compared to Golmaal, as the situation in the former is something more realistic. ATKJ  featured a combination of scenes that were outrageous riots, but many others that were laid back witty narratives.


With a line up of future projects - Rajneeti, Once Upon  time In Mumbai, Garam Hawa, Golmaal 3 and Toonpur Ka Superhero - looking as diverse as that, we are sure looking forward to witnessing the various Devgan Avatars!