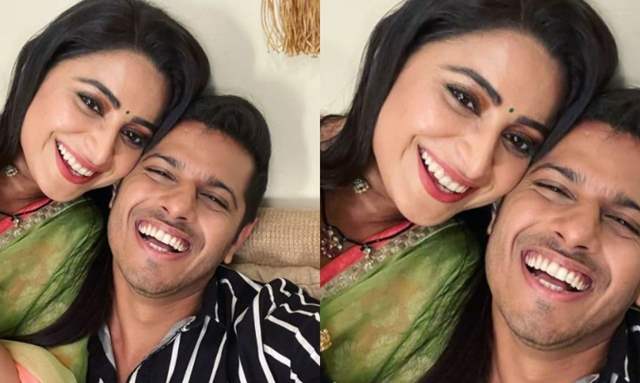 Aishwarya Sharma and Neil Bhatt's roka a while ago did come as a surprise to fans of the actors and the show, however, the two have ever since, managed to wow the fans with their photos and videos and the chemistry that they share with each other. Time and again, they keep sharing photos and that often has fans gushing over them and today, Aishwarya shared another photo with us.

Sharing a photo with Neil from the sets of Ghum Hai Kiskikey Pyaar Meiin, Aishwarya wrote: Smile Is The Best Defense In An Offensive World.. With my love. The photo saw Aishwarya and Neil displaying a toothy smile and well, it might be all the BTS glimpses that the fans need, isn't it? Neil replied to her post as well and wrote: A Smile is ever lasting.

Meanwhile, given the ongoing restrictions in Maharashtra, shows have decided to shift base to various cities and so, the cast of GHKPM has shifted to Goa and the cast keeps sharing photos and videos on social media from time to time. With the show doing well on the TRP charts, the trio of Neil, Aishwarya, and Ayesha Singh has been received very well and continues to be in the news from time to time.

Both Neil and Aishwarya had tested positive for COVID-19 a while ago, however, they recovered soon enough and returned to the sets. While the show's shoot was affected due to the leads testing positive, it did manage to keep up with the fans!

Aishwarya Sharma of 'GHKPM' gives it back to a troll who slammed her ...

18 days ago So ooooooooooooooMadam what I am supposed to do. LOL double lol.

20 days ago Well not interested in their personal life , hope we get some SaiRat pictures too BTS stuff

+ 3
21 days ago They look cute together ❤️ Aish seems like a fun loving girl and Neil is also a funny guy in his own way. Hoping they receive love and happiness 👌