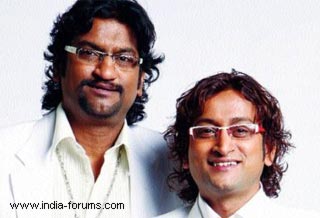 Action films are usually about muscle power and stunts, but Karan Johar's remake of Bollywood classic 'Agneepath' provided many sequences for songs, according to National award-winning composer duo Ajay-Atul.

'Normally in action films, you don't get many situations where you can add songs. If you see action films, where's the scope for music? Even the original 'Agneepath' had three or four songs,' Atul Gogavale told IANS on behalf of the duo.

'Our album has six songs, and we have tried to maintain a good variety with one intense Ganpati song, one qawwali, one romantic number, another song capturing the emotions of a brother and sister... We wanted to give this album our best because it is very special for us,' he added.

Ajay-Atul entered the film industry in 2004. They primarily composed for Marathi films, and earned acclaim for their tunes in the 2009 film 'Jogwa', for which they won a national award. They have even composed for Bollywood albums like 'Viruddh', 'My Friend Pinto' and 'Singham'. But 'Agneepath', the music rights of which are with Sony Music, is close to their heart for a reason.

'We have watched the original 'Agneepath' at least 200 times. We are so inspired by the aura of that movie and by Mukul S. Anand's background score and can relate with the story so much, that we knew exactly what kind of music we wanted to create for the remake.

'It is almost like a dream come true to recreate that aura, especially because we are such big fans of the film. We wanted to keep the same grandeur of music that people used to listen to in the 1980s, which is missing nowadays. So we used a lot of live instruments and a lot of percussion to bring that feeling alive,' said Atul.

Their spicy song 'Chikni chameli', a Hindi version of their own Marathi hit 'Kombadi palali', is already a rage on all music channels and radio stations. The duo is glad that through the movie, they have got the chance to take their Marathi tune beyond regional cinema.

'The song is a great move for Marathi cinema because you never had so much confluence of talent within India. The song is very peppy, and Karan Johar wanted us to do a Hindi version of it for the film. Of course, Katrina Kaif's dance has added to the song and we are glad with the way it has been received,' he added.