Mumbai, June 11 (IANS) Filmmaker Ketan Mehta, whose upcoming film 'Rang Rasiya' is based on legendary painter Raja Ravi Varma's life, says his next project would be on Rani Laxmibai, followed by another on last Mughal emperor Bahadur Shah Zafar.

Mehta has earlier made a number of movies on historical personalities like 'Sardar', a biopic of freedom fighter Sardar Vallabhbhai Patel, and 'Mangal Pandey', which had Aamir Khan in the title role.

'Actually 'Mangal Pandey' was a three-part series. It was designed as a trilogy. It starts with Mangal Pandey followed by Rani Laxmibai, ending with Bahadur Shah Zafar,' Meh 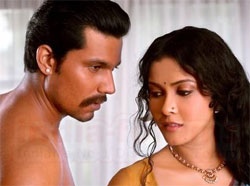 So when is he starting the other two projects?

'Once 'Rang Rasiya' is released, I will start with the Rani Laxmibai project and once I am through with it I will start the next one because I can do only one project at a time,' he said.

And who will play Rani Laxmibai, the queen of Jhansi who fought bravely against British rule?

'Nothing is finalised yet ... talks are on with Aishwarya Rai. A lot of international cast will also be seen in the film,' Mehta revealed.

'It will be a big project with international finance and co-producers. The script is ready and shooting will start as soon as other formalities are over,' he added.

The film on Ravi Varma, set for a July release, is a bilingual, 'Rang Rasiya' in Hindi and 'Colours of Passion' in English.

The movie was showcased at the recently held Cannes Film Festival, where Mehta was also honoured as an Officer Of The Order Of Arts And Literature - a recognition by the French government to people who have contributed to the enrichment of art and literature. The award will be presented in August.

'The film got an overwhelming response at Cannes. As a result, it has been invited to various film festivals across the globe,' Mehta said.

'Though Randeep is known for his action image, he is an incredible actor. I met Randeep and saw his acting skills that made me sign him. He is one of the finest actors of the present times,' Mehta said.

The film is an adaptation of the novel titled 'Raja Ravi Varma' by Marathi novelist Ranjit Desai.

'Though the book was written after an extensive research on the painter's life, some cinematic liberty has been taken to make the film,' the filmmaker said.

Mehta added that he was truly fascinated by Ravi Varma's work, which holds a special place in the history of Indian art.

He said half of India prays before images of gods and goddesses derived from Ravi Varma's paintings.

Mehta had actually wanted to make 'Mangal Pandey' 17 years ago. If it had materialised, whom would he have liked to cast in the lead role?

'Every film creates or acquires its own life at any particular point of time and we look for the best person available to suit the character. We had talked to Amitabh Bachchan for the role back then.'