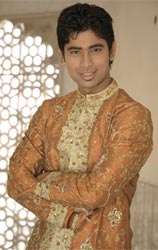 Rakhi Sawant might not have chosen the lawyer from Rishikesh, Uttarakhand, Manmohan Tiwari as her life partner on NDTV Imagine's show Rakhi Ka Swayamvar, but the young lad who is also an actor with theater background seems to be the hot property of NDTV Imagine even now.

As reported by Tellybuzz, Bhavna Khatri who earlier played the character of Kulraj in Kis Desh Mein Hai Meraa Dil will play the female lead in the show.

When contacted, Manmohan Tiwari confirmed the news and said " Yes I am part of Jhamuniya, however I cannot reveal much now".

Manmohan Tiwari was the guy who actually dumped Rakhi Sawant before she could think if choosing him. The guy has a very good command over what he talks, and also feels that he has got this show only because of the blessings from his parents and nothing else.

The shoot of Jhamuniya began in December 2009 at Chhattisgarh, and their promo is expected to air in early February. The show is expected to launch in the last week of February or March.

We tried calling Producer Yash Patnaik, but he refused to comment

rabzonedge 10 years ago rakhi also did RKS for publicity....whole show was fake....n so was he...

greatsaleen 10 years ago yayy! he was the funnest thing about that show!

Miss.Colorfull 10 years ago finally he found his true place. a gud actor for sure

-Lana 10 years ago lolz i knew he was just using rakhi to be popular, and here we go...go manmohan

AlwaysHisJaan 10 years ago i loved him in rakhi ka swaymar .. and i will watch this show ..... rakhi should have picked him isntead of elesh just imagine manmohan and rakhi in pati patni aur woh ......