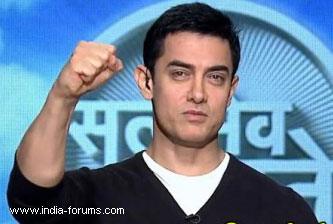 Aamir Khan is a man with the Midas touch. As the first episode of the superstar's debut TV show "Satyamev Jayate" was aired, about 100,000 people dialled in to speak to him to initiate a serious discussion on social issues facing the nation.

Out of approximately 100,000 people who made the effort of calling in to share their views about the show through the Airtel 'Talk2me', only around 10 or 11 were actually able to speak to Aamir due to time constraints, said a source from telecom company Airtel, which is facilitating the SMS and dial-in procedures for "Satyamev Jayate".

Nevertheless, Aamir engaged in quality discussions with the callers.

He shared views on social activist Anna Hazare's movement against corruption, took up issues regarding female foeticide - the doctors who conduct sex determination tests and abort the girl child, and how the medical system of the country fails to take any action against such law breakers.

A Gurgaon-based caller named Apoorv compared the show with Hazare's movement, which had found immense support from Aamir as well. But he expressed concern that the effect of the show must not fizzle out.

"I'm afraid that this movement should not end as Anna's movement got. As it's known to a very few people only that Anna is again initiating a movement from Pune. So now I'm a bit sad and think Anna was better in his home rather than facing the way his movement is getting diminished now," said the 25-year-old in a conversation with Aamir.

But Aamir reiterated that change is only in the hands of each individual.

"Anna's movement could only be successful towards corruption if every individual has to ask oneself if he or she is associated with corruption or not," responded the actor.

"Only we are the one who can bring the change. As you have already said that once you were a notorious guy and you changed yourself. So if we change ourselves, only then our society can feel the change," he added.

Yogendar, a caller from Guwahati, questioned the motive behind "Satyamev Jayate".

To that, Aamir replied: "This is an effort from our end to show the crucial issues of our society and our country. We have worked for two years to gather the complete information about the same. We will come every Sunday to tell you about one issue every week."

Though a lot of people tuned in to Star Plus to watch the show, and subsequently took to social networking platforms to share their views on it, Aamir says Television Rating Points (TRPs) do not matter.

The Star Plus show, which went on air Sunday brunch time 11 a.m., caught the attention of viewers from all quarters of the nation.

The channel has collaborated with Airtel, which has reduced the cost of every SMS directed to the show to Re.1 from Rs.3.

The revenue collected through each SMS will be donated to a charity.

"We have always taken the lead in associating with events, shows and initiatives that resonate well with the preferences of today's India. With connecting with people spread across India as a common focus area for both 'Satyamev Jayate' and our brand," Bharat Bambawale, director, Global Brand, Bharti Airtel said in a statement.

"We look forward to the role it ('Satyamev Jayate') will play in entertaining the masses while bringing inspiring stories to the fore," added Bambawale.

The show is aired in eight languages on nine channels, including eight STAR TV network channels and is simulcast on national broadcaster DD1.

+ 4
8 years ago Iam just really happy to learn that this show is making an impact on such a large scale. Iam sure this show will go down in history as something very hard-hitting and iconic. I also hope and pray that the impact and message of this show doesnt fizzle out. Fingers crossed!

8 years ago This was absolutely fantastic. . .true perfectionism . . I have never felt the impact of a reality show as much as this one:: and yet its just aired 1 episode, wow. . absolutely amazing. .

Thank you to Aamir and all the people who shared their heart-wrenching stories!

8 years ago satyamev jayate...fanatastic and eye-opener show...kudos to entire team...

8 years ago satyamev jayate... awsum show...first episode was sooo heart touching... hope this can bring some change in society...

8 years ago Hope this show bring about some real results.

11 years ago congrats to her for a wonderful wedding life.. looks is not only thing which is important in life.. if he is a good person which will make her happy throughout life !!!!!!!!