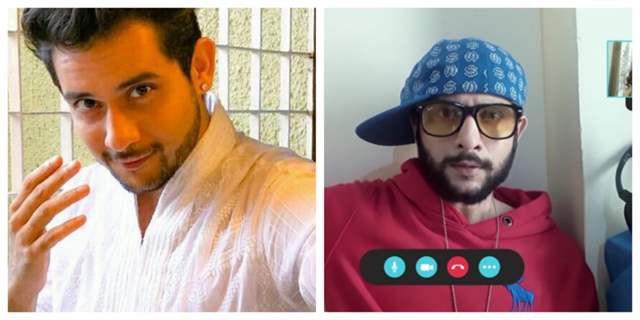 Eros Now Quickie, is all set to stream the 2nd edition of its much-loved mini-series ‘Date Gone Wrong’. Directed by Karan Rawal starring Abhishek Sharrma and Bhakti Maniar, the refreshing mini-series will entertain audiences with a unique take on virtual dating and the hilarious outcomes of these adventurous initiatives. One of the episodes shall display a funny banter between a popular rapper and one of his fans while another episode shall present an interesting dialogue between two individuals from different countries that starts off with a romantic tone and takes a surprising turn that changes the entire equation.

We got in touch with Abhishek who spoke to us about about his experience shooting from home, his character, challenges faced and much more.

First of all, tell us something about your experience while shooting the series as it must be quite a different experience shooting it in the lockdown.

Absolutely. It was in a good way, a very different experience and it was very crazy. But it was fun. We all started and I met the director Karan through video call and he explained the whole gist to me. Usually when we are on the sets, we talk and we improvise. This is a little bit on the lighter and the comedy zone, so we all would have liked to collaborate on that level and do something but unfortunately that thing was not there so we had to improvise on zoom call only. We did it and even while shooting there were several difficulties because I was alone. I'm myself saying action and cut and was sending it to Karan and he told us what to do. Even with Bhakti, when we were talking and rehearsing, we kind of hit it off really well. Luckily, the end product came out really nice.

Tell us something about your character in the series?

My name in the series is Sultan and he is a very big rapper. Unfortunately, when you'll watch the show you'll realise that he is too much of himself. He thinks of himself as an extremely cool and supersonic person.

What's the one thing about the series which immediately made you say yes to it?

First of all, when I got to know about the series, I was like how will we shoot? Then when I was told the whole scenario, the whole character, the whole outlook and the concept of it, it was so different that I immediately said yes for it.

Do you have any particular favourite scene from the series?

I can say it from my own episode. The end portion in my episode is one of the most funniest scenes from my episode.

You also spoke about the difficulties that you faced while shooting. So what was the most challenging part about it?

I think to control myself was the biggest challenge. I am a kind of person, when I do comedy, evey take is different. I'm somehow kind of weird that way, I somehow give every take very differently. To control myself from improvising was a big challenge for me and I had to be precise of what I'm doing because she is shooting her portion separately so I had to keep that in mind. Even if I'm improvising, I had to definitely go and tell her about it. So that thing, to keep control on yourself was a big task for me.

Signing off, he said, "I just want everybody to enjoy the show and watch the show because the current situation that is going on is a very serious matter, something which we should be aware of but we're trying to give the people a little bit of entertainment. So I hope everybody watches it and gets entertained and gets a little mind off from what's happening around."

Netflix & Amazon Prime shows to not go under Budget Control!

Shooting Ex-Girlfriend & Then Shooting Himself: Hagen Mills Case Has A ...