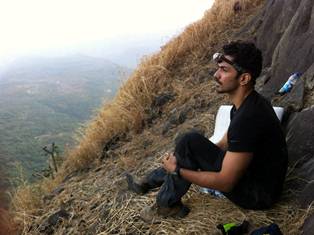 Abhinav Shukla who was last seen in Badalte Rishton ki Daastan on Zee TV is an adventure junkie and recently went on a trek with his friend but had a scary encounter he will never ever forget! What started off as a simple trek turned out to be a disastrous encounter with just one wrong decision of taking a short cut.

While Abhinav was too busy to talk he has posted a video on a social networking website where he spoke about the ordeal immediately after being rescued. "I and a friend started the trek to Chanderi Gad on 5th Jan at 4 pm in the evening. While climbing up the fort we saw a big stream running down which appeared like it will cut our distance short so we took that route and continued climbing. By the time we climbed 1/3 rd of the stream we realized that it was not such a good idea but since the climbing is easier than the decline we kept going till we reached mid-way of the stream. It was already dark by then so we used our head gears which had been fitted with torch to see our way ahead but the problem with these torches is that you just see a small area in front of you but forget the landscape in totality and the slope. Anyway adrenaline had kicked in and we were moving ahead but my friend who was ahead of me stumbled and a rock fell. I kept calling him for like 4-5 minutes but he didn't answer and I thought it was he who had fallen down. I thought things had gone bad and that he had either died or injured himself and that's why not replying but then after 5 minutes he replied saying he had got hit on the forehead and nose and had gashes due to the rock.

I had a backpack weighing around 12 kilos which had our tents, water filters, stove, sleeping bags etc., in it. I had to jettison the bag and climb up the slope since I had water in it which was very important that we drink since we realized we were now stranded. It was dark and no one would come and help us in the night so we decided to climb up till we reached a very small ledge on the hill. I carried the bag up with me and saw that the ledge had just enough space for two people to squeeze in and sit so we finally decided to stay there in the night.

In the little time that I had the signal on my mobile I sent SOS messages to my brother and some friends in Mumbai. We had only 2 litres of water left and if nobody would have come to our rescue we needed it on our climb back down in the hot sun in the morning so we decided to ration it. We ate instant noodles raw, had some vegetable oil which gave us energy and tried to sleep without any sleeping bags or tents even as the temperature dropped down and it became pretty cold for a human body out in the night. We tried to bundle up dried plants lying nearby and lied down and waited throughout the night which was probably the longest night in my life.

My message reached one of my friend who came down with professionals who were good at rappelling and rock climbing. They came with ropes and rock climbing equipment and I realized that if we wouldn't have been able to send SMS to anyone we could have been stuck for good! We could probably have died! At the end of it I was a bit delusional, dehydrated with no sleep and my body was falling apart all bruised and cut. However, it felt good that we were out of danger and able to live another day." 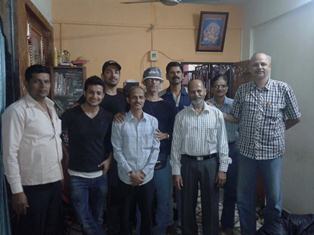 The friend who came to rescue Abhinav is another travel and adventure enthusiast actor Rajesh Khera. Rajesh who is a popular actor is still remembered for his role as Maddy the fashion designer from Jassi Jaissi Koi Nahin. Apart from doing cameos on television, Rajesh is currently busy with his play Kknock Kknock. Telling us about the experience Rajesh says, "Abhinav had in fact asked me to accompany him on this trek but I refused. On 5th Jan at around 8:30 pm I got this SOS message from him and tried to contact his brother who is in Navy and based in Delhi but his phone was switched off. I realized I had to do something myself and act fast. I immediately got in touch with couple of our friends and got to know about Nisarg Mitra, an association based in Panvel who are good in rescue operations. I googled, found their number, spoke to them and they decided to organize a team who would climb up the steep mountain. I was co-ordinating with them and then joined them too in the climb which we started early morning on 6th Jan. There were two routes to the place that we thought Abhinav and his friend Ranveer were stuck so we decided to take one route since he had sent some message to his brother which mentioned something about it. However when we climbed up we could not see them which is when we started calling out their names. We got a response but to reach them we had to go through a dense jungle and then 100 feet up vertical. We took four hours to go up by rapelling and two hours to get then down from there. The entire rescue operation took six hours and we all were back to safety at around 3 pm. Luckily, Abhinav had his phone and the signal to send us messages on time. He also had enough battery saved to click some pictures on the deadly ledge when the rescue team found him."

The good friend that he is Rajesh didn't think twice about his health which actually deters him from steep climbs, "I have a ligament problem in my knees and my doctor has advised me against it but I never had time to think about it and did it for my friend. I thought he will feel good upon seeing me and it will boost his confidence. I also knew they would be hungry so I had taken chocolates, protein bars, biscuits, roti rolls from home for everyone which were very useful."

All in all it will be a haunting experience for all especially for Abhinav and his friend and for Rajesh too who turned out to be a real friend indeed!

Bigg Boss 14: Abhinav Shukla says 'We were already in a lockdown, we ...

Bigg Boss 14: Rubina Dilaik says 'When you're going inside the house, ...

pmahiskey 6 years ago thank god ur safe. u were my fav character in jersey no. 10

.albatross. 6 years ago Kudos to Rajesh! and glad to know Abhinav is fine now. :)

..CountingStars 6 years ago Awwh man that must have been scary as eff! =( Glad to know he's fine now. Take care of yourself Abhi!

_mahi_ 6 years ago awww Take care of yourself Abhi

aleyammakroy 6 years ago Rajesh, you are really a true friend indeed. God bless you 4 your effort.Abhinav , You are so lucky to survie,take care of yourself. god bless you.