Mumbai, April 13 (IANS) Abhishek and Aishwarya Rai Bachchan will be in Miami for their first wedding anniversary next week. Not that they planned so. 'It just happened,' says Amitabh Bachchan.

'Abhishek is shooting in Miami for 'Dostana' on their marriage anniversary. And Aishwarya is going to be with him,' Amitabh Bachchan told IANS. 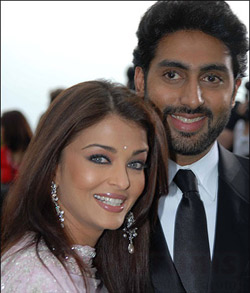 'We'll get them by a new technology called skyscape to speak from Miami to mediapersons in Mumbai at the launch of 'Sarkar Raj' - which happens to be on the same evening as their wedding anniversary,' he said.

'Sarkar Raj' director Ram Gopal Varma says it was just a coincidence that the unveiling of his film will take place the same day.

'I didn't even remember it was Abhishek and Aishwarya's wedding anniversary on April 20. We decided to do the First Look party of 'Sarkar Raj' on this day because it was six weeks before the release,' said Varma.

'It's just a coincidence. I don't keep track of anyone's birthdays and anniversaries, not even mine.'

Ramu is excited about something else too. 'This is the first time the actors of an Indian film will be connected to the media via satellite. We're doing it through a technology known as skyscape. I think it's very exciting to reach out by modern technology in this way. Aishwarya and Abhishek will be live from Miami in Mumbai.'

However, Big B will be present at the Mumbai event.

Tell Ramu that the 'Sarkar Raj' event will be eclipsed by the excitement over its lead pair's wedding anniversary, and he shrugs.

'It doesn't matter. We cannot separate Abhishek and Aishwarya's life from 'Sarkar Raj'. Very soon after the First-Look event we'll have the music release. T-Series is releasing the music soundtrack.'