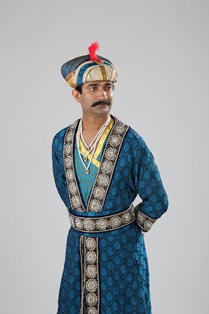 He has got the ada, tehzeeb and lehaza of a Nawab and has got a royal air about him! A flowing anarkali kurta, traditional mojaris, and an adorned sword are his props! We are talking about none other than, your very own Biji Pandey (played by Abbas Khan) from SAB TV's 'Lapataganj Ek Baar Phir', who will be seen in a brand new avatar in the upcoming track of the show. Abbas, whose character Biji Pandey is a Road side Romeo', will be seen playing a Lucknawi Nawab in the show for the first time ever.

Though Abbas will play a Nawab on screen, it is a lesser known fact that Abbas actually belongs to an erstwhile royal family from Lucknow! Talking about his Nawabi connection, Abbas says, "Not many people know that I belong to the family of Nawabs from Lucknow. It is always fun to play a character you can relate with on screen. It has been a pleasure shooting in Lucknow as I have grown up here and it takes me back to the beautiful memory lane. This track has also helped me in brush up my Lucknawi mannerisms. We have also shot at my house for some scenes to lend an authentic Lucknawi look in the episode."

Coming from a Nawabi family, Abbas also helped the writers with the dialogues and the screenplay for this particular track.

irene_c 9 years ago You are the best. Absolutely theeee best

bollywoodbabe1 9 years ago BigB is the greatest!He's going to rock in this one too! Love him!

Shaina_b 9 years ago Big B is too good at everything he does!!!!!

sathso 9 years ago BIB B IS ALWAYS BIG WHETHER HE IS 60 Or 25. HISTORY IS THE BIGGEST EVIDENCE FOR THIS

blossom11 9 years ago u rock wid watever u do....so waiting for d same dhamaka
luv u

Vishakha_Sakhi 9 years ago Hmmm hasn't he done this already in KANK?

-Miya- 9 years ago He's already done enough of these kinds of roles .. KANK and Bhoothnath had many shades of this role already. BigB time for something hatke, although I don't think there's anything you haven't tried yet in your 40 year film career

MeeraXD 9 years ago i hope its good unlike bhootnath and others he did....

Sunil Gavaskar Responds To Anushka's 'Distasteful Remark' ...
a minute ago

'RadhaKrishn' Fame Vaidehi Nair Roped in For 'Brahmarakshas ...
5 minutes ago