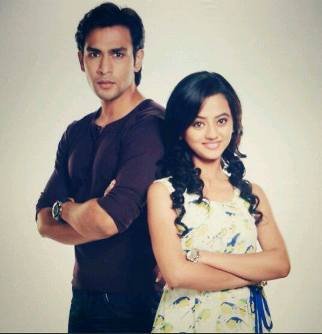 Khushiyon Ki Gullakh Aashi is a never-seen-before concept in the history of Indian Television. This feel good show promises to enthral viewers with the story that traces the journey of a simple bubbly and cheerful Aashi (Hally Shah) who adopts new parents in a search of parental love. Naren Kumar and Susheel Pandey of Miloni Moviez recently finished an extensive outdoor schedule at real-locations in Jabalpur capturing the essence of the city and its local flavour. Apart from Ashi (Hally Shah) in the show will be also seen Tv's popular chocolate boy Naman Shaw,Abhishek Sharma, Rohitash Gaur and Nishigandha Wad are part of this daily being directed by Pratik Shah and written by Bhavna Vyas.

The concept revolves around the life of 22 year old Aashi, a bubbly cheerful girl who spreads happiness but is a lonely within. Aashi always longed for her parent's attention and love but they on the other hand have been always busy in pursuing their career and work.

Circumstances have made Aashi a little mature and emotional person. She has learnt to take all her decisions on her own at a tender age of twenty. And one of her decision turns out to be so revolutionary that it shakes the very social and belief system of our land. Can a girl adopt a new set of parents when her biological parents have failed to perform their duties and roles? To fulfill her vision- she faces much opposition, but she is not bothered about them, she wants to go ahead and do what she believes in.

Talking about the show producer Naren Kumar said, "Miloni Moviez has always associated with offbeat concepts and exploring new genres and unique story line,  Khushiyon Ki Gullakh Aashi is mine and Sushil's personal conviction that reflects in the show. The positivity that the characters bring forward in the show, the ease and complexity at the same time of Aashi's character needed a very delicate treatment. When we met Hally things just fell in place & we think it couldn't have been anybody else who could play Aashi better. Its a multi layered script and will have parallel track on various aspects of Aashi's life that adds to the excitement. It's a story of a small town girl, her ambition, compassion, her love life & the refreshing approach towards life that shape the character of Aashi.

Producers Naren Kumar and Susheel Pandey of Miloni Movies is known to bring out fresh innovations into Indian entertainment industry, both in Films & Television Serials, who are predominantly makers of movies having a good body of work on the big screens. Few of the movies they have been associated with includes Ahista Ahista, Phas Gaye Re Obama, Jolly LLB,. The interesting aspect is that their movie Jolly LLB won both the Filmfare and National Awards, which is a unique feat in itself and are popular for their maiden television venture 'Tota Weds Maina' with Kavita Kaushik and Gaurav Gera in the lead roles for SONY SAB Tv and are now coming up with a heart wrenching story of a girl called Aashi in Khushiyon Ki Gullakh Aashi for the new channel Sony Pal. Apart from this TV show Naren's is working on his upcoming project Buddhu Rangeela starring Arshad Warsi, Ronit Roy, Amit Sadh, Aditi Rao Hydari and others while Susheel is playing a pivotal character in Vikram Bhatt's under production film MR. X, starring Emraan Hashmi for Vishesh Films in association with Fox Star Studios. Their aim together is to Craft new ideas which has novelty in story to entertain the viewers.