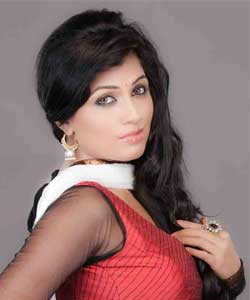 Aarti Puri who will be seen playing the character of Trishna in Colors Madhubala - Ek Ishq Ek Junoon has not started on the best of notes and managed to hurt herself during her introductory shot.

According to our source, "Aarti Puri has injured herself during the shoot. Aarti who was shooting her introduction scene in a disco injured her hand while dancing. It's a muscle tear due to which she can't even move her hand."

We contacted Aarti who confirmed the news, "Yes, I have this muscle pull but I don't know exactly what has happened because I haven't gone to doctor. It was my introduction scene where I am dancing. I injured my left hand and now it has gone from bad to worse."

RiMa_972 8 years ago Hope you have recovered Aarti.
Love you Drashti - you Rock, Princess!

aarti u r doing a great job as trishna

NoorFatima 8 years ago hope u get well soon .. and keep doing a wonderfull job ..

chinky353 8 years ago Awe! I hope your hand heals quickly.Your acting in madhubala is amazing. keep it up as trishna!! :)