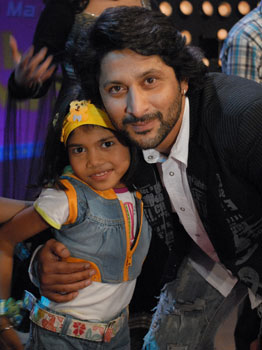 There was a short 'circuit' on Sa Re Ga Ma Pa L'il Champs recently when Arshad 'Circuit' Warsi infused the latest episode of the show with his mad energy.


An amusing kissa worth a tell would be when li'l Vaishali, the non-stop blabber-mouth of the show appeared on stage, her mouth stuffed with a nipple. Not able to digest the fact that a 10 year old kid should have to be "nippled up", Arshad frowned, saying, "'Don' be silly, guys! You can't do that to a 10 year old!"

Host Aditya Narayan explained, "Trust me Arshad, There's a reason. Try removing the nipple and you'll know what I mean." And Arshad did just that. "Off with the nipple, NOW!", he demanded.

Little did he know about the verbal diarrhoea the girl would subject him to. She talked and talked and talked till a harrowed Arshad begged "Bass roko ise yaar." Fearing the shoot would never end, he ran up on stage and replaced the nipple himself. "Aapka bachpan nahin, pachpan saal chalu hai", said Arshad to this li'l daadi amma.

The actor was floored by the ease with which these talented kids face the camera. Teaming up with the li'l ones, he played a prank on his 'Sunday' co-star Ayesha Takia who went red in the face with embarrassment. Trust apna Arshad to lend a spirit of fun 'n' madness to anything he associates with!

+ 2
14 years ago cool, loved the first part,Hope Rahul stays in sequel too :)

Wow, Arshad and Ayesha coming, sounds nice, cant wait.. thanks for the article :)

14 years ago Wonder what the kids are going to sing! There is no mention of that in the article...

+ 5
14 years ago aww Vaishali is too cute!
cant wait for the epi

14 years ago LOL... Vaishali is quite a chatterbox but she is cute. Hope she follows Suresh ji's advice and works hard towards her singing goal.
Looking forward to see Circut in SRGMP Lil champs =)