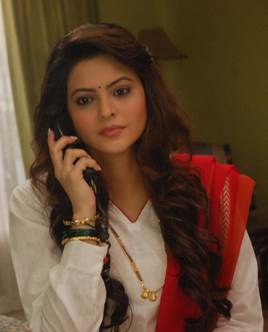 Having been a popular face on Television, Aamna Shariff's excitement knows no bounds given her Bollywood debut - Ek Villain releases this Friday. Visiting the sets of Zee TV's Pavitra Rishta to promote her upcoming movie - Ek Villain, Aamna was accompanied by actor Riteish Deshmukh, who plays her husband in the movie.

In the show , you will see Rakesh (Ritiesh Deshmukh), who runs a phone repair shop, going to the Police station to lodge an FIR, following a burglary that has taken place in his house. While Rakesh is registering the complaint, the cops warn him about a murderer on the loose who has been targeting innocent women. As Rakesh rushes out of the Police station, he notices Manav (Hiten Tejwani) and Archana (Ankita Lokhande). He recognizes Manav to be the same guy who had come a few days ago to get his phone repaired. The two briefly exchange pleasantries and Rakesh hurries back home since he has promised his wife Sulochana (Aamna Sharif) that he will take her out for a movie. The sequence sees a merging of the ongoing track of Pavitra Rishta with the theme of 'Ek Villain'!

While Aamna was seen reliving her good old TV days, Ritiesh seemed to be having fun shooting for a Television show as well. Talking about the integration, Manav (Hiten Tejwani) said, "Apart from making an exciting episode for the audience, such integrations provide us with a good interface with actors of the film fraternity ... it's great to exchange notes with them when they shoot with us. I have shot with Riteish Deshmukh in the past when he had come to promote yet another movie on Pavitra Rishta, and this time around, the two of us were well-coordinated as we already shared a certain comfort level."

We wish Aamna all the luck for her debut in Bollywood and hope that the movie works wonders at the box office!

6 years ago Love u Ankita Lokhande u r so beautiful...

+ 3
6 years ago Amna Sharif is rocking... want u back with Rajeev Khandeval

+ 3
6 years ago Aamna Shariff u r the best..very excieted for ur comeback..

6 years ago This is NOT Aamna's bollywood debut, why can't you people acknowledge her previous attempt in films. Aamna is really beautiful actress till now.

+ 2
6 years ago you r looking great in PR these days hiten tejwani..looking fwd for the segment